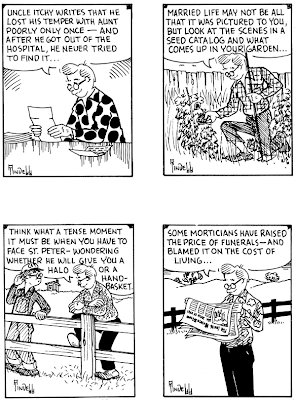 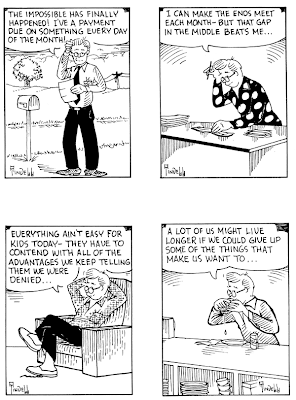 After 25+ years researching American newspaper comics, I’m still constantly amazed at how many comics features remain lurking in out of the way papers.

Last weekend I went up to Micanopy, a little tourist town in Northern Florida with some good book shops. At the best shop in town, O. Brisky Books, I emerged with a nice pile of goodies. There was a book of Paul Revere’s cartoons (etchings in the parlance of the hoity-toity book), a book of Israeli newspaper cartoons from the Six Days War, and a biography of Don Marquis. But the interesting oddball of the bunch was a little booklet titled “The Best of Judge Blount” by Ted Tindell. I’d never heard of the feature or the cartoonist, and I’d never before seen a copy of the booklet.

Paging through it, the feature is revealed to be sort of a latter-day Abe Martin. The judge dispenses folk wisdom, good-natured common sense, non-partisan political and social commentary and bewilderment at the ever-changing world. A short introduction revealed that the cartoon panel series ran in the Maryville-Alcoa (TN) Daily Times on a daily basis starting on May 5 1976.

The booklet itself wasn’t dated, but by the looks of it I’d guess late-70s to early-80s. So that means these little Judge Blount cartoons could very well have run for a couple of years and that was bout it. I Googled the artist and his feature and came up pretty dry. This also led me to assume that the feature was a long-forgotten blip on the map.

Without even a guess at an end date, though, I took a moment to dash off a query to the editor of the paper, asking on the off chance if he or anyone there had any memory of the feature. A few days later, managing editor Frank “Buzz” Trexler, wrote back, sending me Tindell’s obituary, which follows:

So there’s your ‘obscurity’ for today — unknown to the world at large, but a cherished daily tradition for twenty-two years for the newspaper readers of Maryville. Humbling to think that someone can produce something that people enjoy for that long, and yet never receive any notoriety outside that small circle.

3 thoughts on “Obscurity of the Day: Judge Blount”