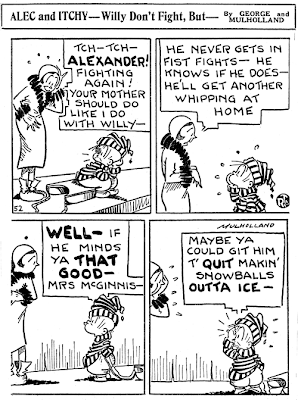 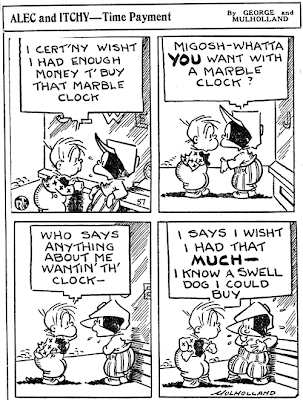 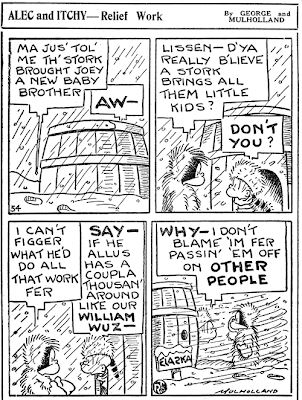 Reg’lar Fellers by Gene Byrnes and Just Kids by Ad Carter were very successful features, and as such they spawned imitators. Because the artwork in the two strips was pretty basic, the imitators usually not only duplicated the concept but also the art style.

I believe that was the aim of Alec and Itchy, a kid strip created by a couple of Pittsburgh Post-Gazette staffers, Jimmy George and Merle Mulholland. The duo’s nod to originality is (I think) to include a black kid as one of the stars. I say I think that’s the case, because the kids are drawn with such minimal detail it could very well be that Itchy just has a dirty face.Alec, oddly enough, looks like Snoodles, a character created by P-G editorial cartoonist Cy Hungerford, whose feature Snoodles Diary, ended in 1927 after a long run.

Alec and Itchy was picked up for syndication by the Register & Tribune Syndicate, but evidently they had no luck selling it. The strip, which began in the P-G on October 19 1931, ended after four months, on February 27 1932, and probably never ran anywhere beyond its home paper.

Jimmy George seems to have taken this experience as proof that his talents lay outside of writing comic strips, but Mulholland may have taken another swing. I have an E&P mystery strip from 1934, called Little Rowdies, by ‘Marsh and Mulholland’. Was this the same guy trying out a similar strip with a new writer?

One thought on “Obscurity of the Day: Alec and Itchy”