Merle Julian Mulholland was born in Pennsylvania on June 22, 1898, according to his World War I draft card and the 1900 U.S. Federal Census. In the census, he was the only child of Charles and Laura, who lived in Jefferson, Pennsylvania on Main Street. His father was a dry goods merchant.

In 1910, he was the oldest of two sons. The family lived in Butler, Pennsylvania at 107 Valley View Avenue. Information regarding his education has not been found. He signed his World War I draft card on September 12, 1918. He lived with his mother at 117 South Chestnut, Butler, Pennsylvania. His occupation was a machinist, who was described as medium height, slender build with blue eyes and brown hair.

The 1920 census recorded him in Akron, Ohio at 90 Taylor Avenue, where he lived with his wife, Isabel. His occupation was machinist. Information about his art training has not been found. The Pittsburgh (Pennsylvania) Directory 1929 listed him at 622 Walnut in McKeesport. He was an artist at the Pittsburgh Post-Gazette Publishing Company.

The 1930 census recorded him at the same address as the Pittsburgh Directory. He was married to Clair; the fate of his first wife is not known. He worked as a newspaper artist. The column, Pittsburghesque by Charles F. Danver, published in the Pittsburgh Post-Gazette, March 7, 1931, hinted at a comic strip by Mulholland.

Stand Up, Merle!
The thumb-nail illustrations in the column this week, you may like to know, are the work of Merle Mulholland, staff artist whose name you will probably see signed to an interesting comic strip one of these days.

Mulholland’s strip, Alec and Itchy, was promoted in the Post-Gazette. 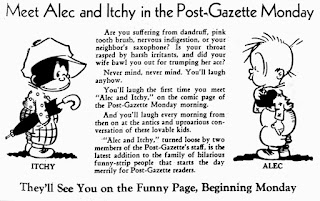