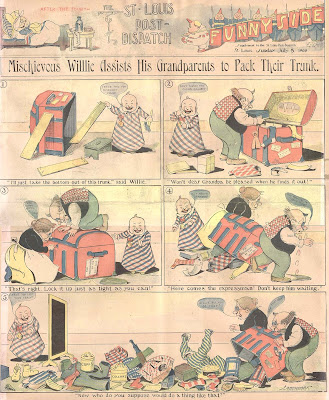 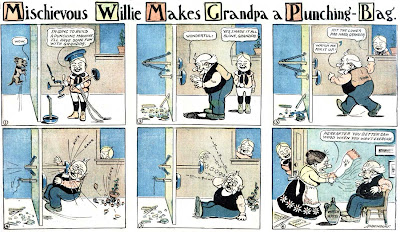 Frank H. Ladendorf spent at least a decade and a half cartooning for the New York World. He was there in 1895 at the dawn of the Sunday comics, and his last work was published at the start of the teens as the newspaper comics world began to settle down from its raucous early years.

Ladendorf’s features were seldom memorable ; his Posey County was merely a second-rate copy of Outcault’s material, and today’s obscurity, Mischievous Willie, is yet another entry in that seemingly endless parade of prank-pulling kid features. However, Cole Johnson points out that Mischievous Willie does exhibit one rather interesting innovation — it may well be the first comic strip series in which the star ages. As proof Cole submits these two samples — the first from 1900, the second from 1903, in which Willie has progressed from infancy to knee-pants age.

Mischievous Willie first ran as a titled feature on May 7 1899 and ended on March 1 1903. Ken Barker’s World index further notes that Ladendorf strips featuring a baby prankster of the same general description began in December 1898.

One thought on “Obscurity of the Day: Mischievous Willie”