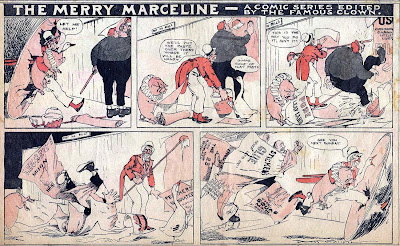 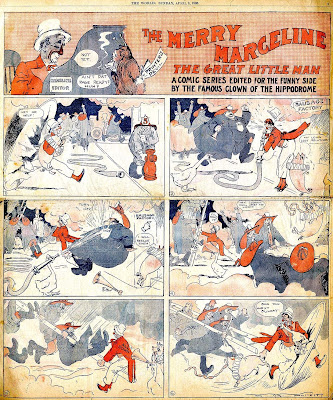 For today’s obscurity I pass the reins to our resident expert on all antiquated forms of entertainment, Cole Johnson ….

Marceline Orbes was an internationally famous clown, born in Saragossa, Spain, in 1875. He was a fixture at the famous London Hippodrome, where he once worked with a very young Charles Chaplin (Chaplin called him one of his major influences).

In 1905, the most elaborate entertainment venue in the world was constructed in New York, also named the Hippodrome. the building was capable of putting on incredible circus shows with gigantic rising stages, huge menageries, and water carnivals. One of the star attractions was Marceline, who was a smash hit. He stayed with the Hippodrome for nine seasons, but his popularity waned, supposedly because of the rise of slapstick comedy films, but also because he was losing his creative spark.

Marceline took his savings and decided to go into business, making bad investments in a restaurant and in real estate. Short on funds, he made a comeback attempt at the Hippodrome, but it was a humiliating failure. The audience greeted the former favorite’s fillips with silence. Soon, the best he could do was be one of the myriad unbilled clowns at Ringling Brothers.

Chaplin saw him at this bleak point, and remarked at what a sad comedown it was for the once-great droll. (Typical of Charlie, he didn’t help his “major influence” or give him a job, however.) After a while, Marceline couldn’t find any work at all. He lived in a grimy dive, the Hotel Jefferson ( 226 W. 50th St.) in New York, where he “never had visitors, received mail, or telephone calls”, according to the landlady. On Nov. 3, 1927, he pawned the last thing of value he had, a diamond ring, for $15.00. On Nov. 5, a maid found him kneeling at his bed, as if in prayer, surrounded by various portraits from his days as a star. Police were called in and they found two bullets, one in the wall, the other through his head. The old clown had apparently been shaking so hard that his first shot missed. The sounds of the gun shots had been ignored, just like the man who fired them. He still had $6.00 left.

On that sad note let’s dispense quickly and solemnly with today’s obscurity. The Merry Marceline, supposedly edited by the famed clown himself, was drawn by Foster M. Follett for the New York World. As you can see in the above samples the action is frenetic, and that lends credence to the credit because Follett, left to his own devices, generally went for a more low-key approach.

Marceline’s comeback on the funny pages was very short-lived. It ran from April 1 to May 13 1906.

3 thoughts on “Obscurity of the Day: The Merry Marceline”