Frank Livingston Fithian was born in Philadelphia, Pennsylvania in November 1865, according to Who Was Who in American Art (1985), and the 1900 U.S. Federal Census. In the 1870 census, he was the only child of Francis and Sarah; his father was a store clerk. They lived in Philadelphia.

Ten years later, they were recorded in Haddon, New Jersey. His father was a liquor merchant. The New York Times obituary, April 10, 1935, said “he had lived in Haddonfield since he was 9 years old….” Who Was Who said he studied at the Pennsylvania Academy of the Fine Arts and in New York art schools.
The Hall Family History (1949) and a post at Genealogy.com said Fithian married Marianna Wood on February 3, 1892. An Historical and Genealogical Account of Andrew Robeson (1916) said the marriage was in 1893. The Philadelphia Inquirer, November 20, 1898, reported “Frank L. Fithian, the well-known artist, severely burned his right arm while modeling with wax this week.”
In the 1900 census, Fithian, Marianna and their two daughters lived with his parents in Haddon at 240 Washington Avenue. He was an artist and illustrator. Some of his panel cartoons were published in the Philadelphia Sunday Press. The Times said “Mr. Fithian for more than fifteen years painted many of the cover designs of Judge and also drew illustrations for that magazine as well as Puck (click “The Wreck of the Mary Jane”, page 25), The Youth’s Companion, The Saturday Evening Post, Country Gentleman, Collier’s and other publications.”
In 1910 the census recorded the Fithians in Haddonfield at 232 Washington Avenue. He was a magazine illustrator. Ten years later, he remained at the same address, where he was an artist and illustrator. He designed a toy that was advertised in the Kalamazoo Gazette (Michigan), November 13, 1920 (below). 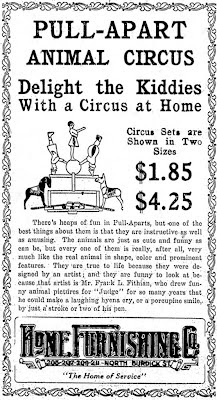 He did not change his address according to the 1930 census. He was a painter. Fithian passed away April 8, 1935. The Brooklyn Daily Eagle reported his death the following day.
Haddonfield, N.J., April 9.—Funeral services are to be held Thursday for Frank Livingston Fithian, nationally known illustrator, painter and designer, who died yesterday at his home, 240 Washington Ave., here. He was 69 and had been in ill health more than five years.
As a young man he won note for his cover illustrations. One of his best known works was his illustration of Curry’s History of the Civil War, in which his drawings were made from descriptions given him by the author. He leaves his wife, Marianna, and two daughters. Interment will be in Harleigh Cemetery, Camden.