Joe Bowers was the pseudonym of Hugh Joseph Deeney, who was born on April 18, 1894 in Philadelphia, Pennsylvania, according to his World War I draft card. In the 1900 U.S. Federal Census, he was the oldest of three sons born to John and Sarah, both Irish emigrants. They lived in Philadelphia at 3813 Olive Street. His father was a railroad conductor.

In the 1910 census, the family remained in Philadelphia but at 3703 Brown Street. Information regarding his education and art training has not been found. According to Deeney’s undated World War I draft card, he was a self-employed artist in Chicago. He gave his Philadelphia address as his home address. His description was short height, medium build with blue eyes and dark hair. The date of his move to New York City is not known.

In the 1920 census, Deeney was a lodger on Manhattan’s west side, 138 62 Street, and worked as an artist. At some point he returned to Philadelphia and produced Dizzy Dramas under the name Joe Bowers.
The 1930 census recorded Deeney at his parents home, 3813 Olive Street, in Philadelphia. He was an “artist publishing a newspaper”. Who’s Who of American Comic Books 1928–1999 said he worked in the comic book industry. According to the Grand Comics Database, Dizzy Dramas appeared in some issues of the comic book Famous Funnies. 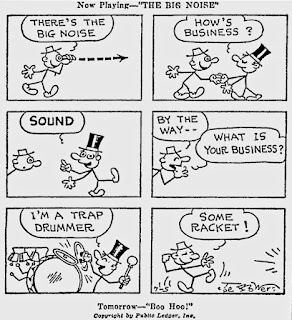 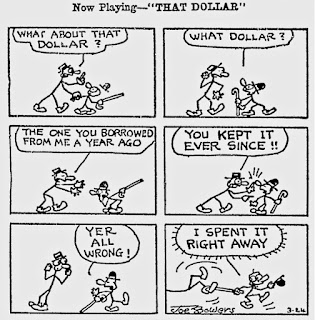 Deeney served in the military during World War II, although a draft card has not been found. He was stationed at Camp Blanding, Florida, a National Guard reservation. The Best of Yank, the Army Weekly, 1942-1945 (1980) published his letter:

Dear Yank,
I am enclosing a picture of me before I got my “rating.” Here you see me as latrine orderly with my helpmate. That building in the background is “it.” Inside, you know, is where all the rumors generate. Well, I must stop now because they are yelling for me. One hillbilly sergeant is shouting, “Deen—ah! Deen—ah! Private Fuss Class Deen—ah! Come yeah out of that thar hut ‘fo ah beats yo’ end off!”

The book, The CCC Chronicles: Camp Newspapers of the Civilian Conservation Corps, 1933-1942 (2004), mentioned the comic strips in the CCC newspaper Happy Days:

…In keeping with the propensity of Happy Days to use talent from the field, and to help keep the paper fresh and current, a new cartoon strip by R. Lemon, “The Little Sarge,” began appearing in the paper on May 6, 1939. This also reflected an emerging military orientation. Similarly, in early 1942, Pvt. Howard Amend, then in the Army, introduced his strip “Beansy O’Brien,” depicting the trials and tribulations of young soldiers. “Rear-Rank Ralph” by Joe Bowers also emphasized the foibles of rank and file servicemen in both the Army and Navy.
The character, Rear-Rank Ralph, appeared earlier in a Dizzy Dramas published in the Toledo Blade, November 18, 1941. Deeney’s life came to a tragic end as reported in the Trenton Evening Times, May 12, 1943:

Deeney was actually 49 at the time of his death.