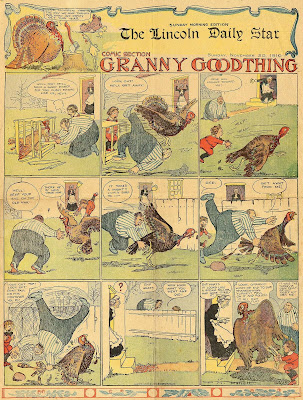 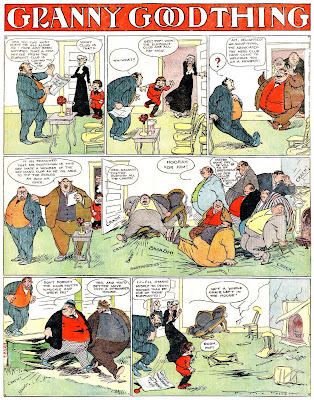 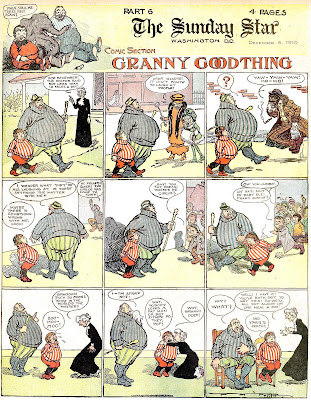 Hope you’re all having a good Thanksgiving. Me, I’ve got a rotten cold so bah humbug (or whatever the equivalent saying is for this holiday).

Cole Johnson, who actually thinks ahead to prepare for holiday posts, unlike me, sends this cornucopia of Granny Goodthing episodes, headlined with a funny Thanksgiving slapstick. Granny Goodthing was the brainchild of one of my favorite turn of the century cartoonists, Foster M. Follett. Follett arguably did his best work for the New York World, but he made the rounds like most of the better cartoonists of the day. Granny Goodthing he did for the Otis F. Wood-copyrighted version of the McClure Syndicate Sunday section. The series ran from November 14 1909 to May 14 1911, a nice long run for a delightful strip.

The premise was that a fat dad and his fat kid are treated rather shabbily by the cold cruel world and only darling granny ever gives them succor. Ah, the piteous plight of the porcine. Well, tough, says I. At least they weren’t stuck sipping chicken soup and using up veritable forests of Puffs Plus on Turkey Day.

5 thoughts on “Happy Thanksgiving, and Obscurity of the Day: Granny Goodthing”