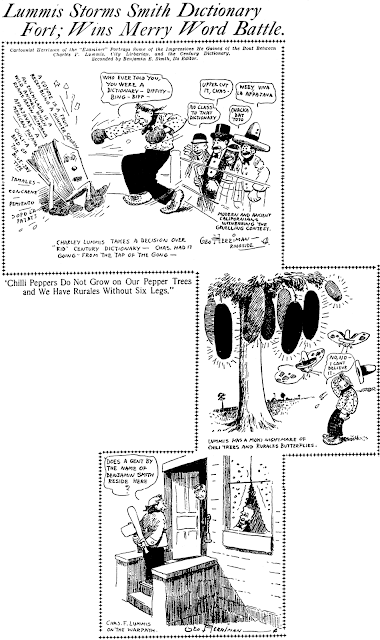 Thursday, August 12 1908 — Hot-tempered local librarian Charles Lummis has reviewed the Century Dictionary, a monstrous multi-volume American dictionary, and found it wanting, primarily in relation to many words associated with California, Latin American culture, and the West in general.

Lummis originally merely made some less than favorable remarks about the dictionary at an NEA convention, and two of the compilers, Benjamin Smith and Brander Matthews, made the mistake of accepting his remarks with some disdain. Lummis then started raising some very public hell about an entry about ‘chili pepper trees’, an entry claiming the Salton Sea had disappeared, less than complete definitions for rurales, chilacayote, the etymology of caballero, and more of the like.

I don’t know if anything ever came of Lummis’ objections, other than giving Herriman the raw material for a fun cartoon. However, no new editions were produced of the Century, so maybe Lummis did have his revenge.