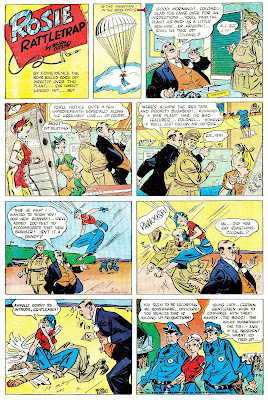 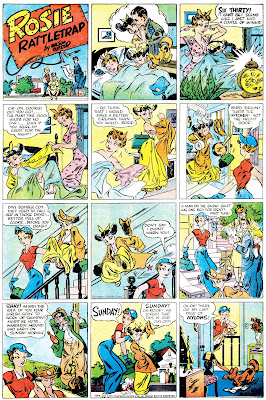 You don’t usually expect a King Features Sunday strip to be so ridiculously obscure, but Rosie Rattletrap sure is. The only examples I’ve found of the feature are from July-August 1944, and the small cache I recently found are the first I’ve seen (or even heard of) in thirty years of collecting.

If the strip were awful it wouldn’t seem so odd that it is obscure, but it’s got a lot going for it. It’s kind of cute, and has some enjoyable, if not overly titillating, girlie art. The subject matter, gals working at a war plant, was a perfect one for 1944, and today lends a social and historical layer to the enjoyment of the strip.

Wilson Cutler seems to have been a magazine cartoonist of some minor repute in the 1940s and ’50s, and a lot of his work that has resurfaced online tends to be on the ever-so-slightly risqué side. This is, as far as I know, his only foray into newspaper strips, though.

Does anyone have additional dates of this feature or know where it ran? I only have unidentifiable tearsheets, but my guess is that they came from the New York Journal.