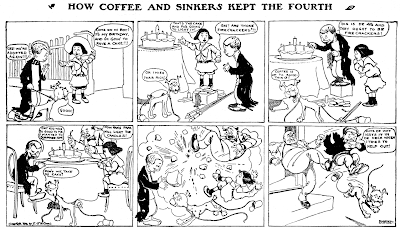 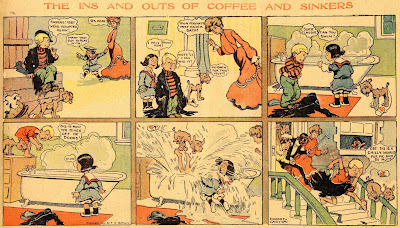 You wouldn’t think that orphan children would exactly be a ripe subject for comedy, but there have been a number of comic strips that chronicle an orphan’s quest to find new parents (or just a home to get them off the street!). I don’t know if Coffee and Sinkers is the first of the genre, but I can’t think of an earlier one. One thing I’ll say for certain, though, is that hands down the funniest is Dwig’s Home Wanted By a Baby. I’ll cover that one of these days when I’m feeling very warm and indulgent toward y’all.

Coffee and Sinkers is a McClure Syndicate entry that ran from June 7 to July 26 1903. It was created by the great illustrator Robert Carter, who slummed in the Sunday funnies on a few occasions. Another of his series, Just Little Ones, uses something more akin to his straight illustration style.

Oh, by the way, if you’re not up on your semi-antiquated jargon, ‘coffee and sinkers’ is slang for cheap coffee and donuts. ‘Sinkers’ because if the donuts are overly dense or stale they’ll sink to the bottom of the coffee cup when you dunk ’em. Mostly a Britishism, but apparently popular on our side of the pond a hundred years ago.

One thought on “Obscurity of the Day: Coffee and Sinkers”