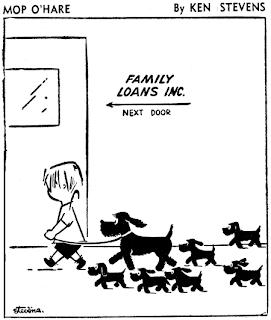 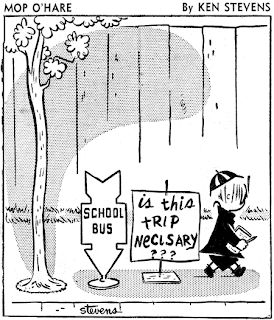 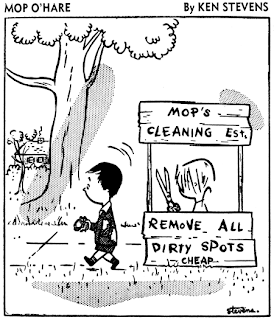 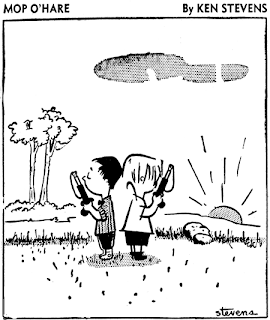 A few ardent cartooning fans still fondly remember Sam Brier’s Small World, a newspaper strip that ran 1952-56 in the New York Herald-Tribune and not many other places. And that strip is worth remembering, from what little I’ve read of it. However, an earlier Brier effort (at least I’m told it’s Brier) from the New York Post Syndicate is less likely to spark warm waves of nostalgia.

Mop O’Hare, about a hirsute li’l hellraiser, is pretty standard comedy fare, somewhat hobbled artwise by the reader never seeing the face of young Master O’Hare. The gimmick of having hair falling into the tyke’s face seems like a cute dodge in theory, but it ends up being a limitation. Brier was a pretty good artist, and seeing the kid’s expression could have really helped to put over some rather pedestrian gags.

Ain’t it a shame they never come to Dr. Holtz to fix up their ideas before they get in the paper? Geez. I could save them so much embarrassment.

Anyhow, questions of my marketing genius aside, the other issue with this feature, which was syndicated from July 30 1945 to January 25 1947, is whether the credited creator, Ken Stevens, is in fact Sam Brier. Folks, I’m not going to lie to you. I’ve got it in my notes that Brier and Stevens are one and the same. But where I learned that is a mystery because I failed to cite my source.

And that’s lesson two for the day — always cite your sources, kids! Between that, and having me review all your feature submissions, this world could be a better place for all of us — especially me.