Entry from Batchelder, Batcheller Genealogy:
Descendants of Rev. Stephen Bachiler, of England (1898)
with illustrations from the book 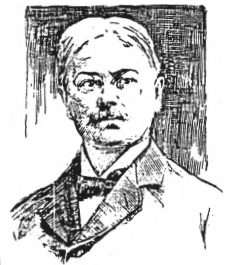 Charles Fletcher Batchelder (Janies L., Jeremiah S., Nathaniel, Samuel, Nathaniel. Nathaniel. Stephen), b. Cincinnati, Ohio, March 29, 1853; [married] Feb. 8, 1885, Harriet Pottle, b. Jan. 3. 1858. Charles Fletcher Batchelder was born in Cincinnati, O.; was associated with his father in the book business until the fire of 1871; went west to Clyde, Kan., where he aided in the conduct of a weekly print; was appointed postmaster and captain of a military company. Returned to Chicago in 1879-80; was reporter on the Chicago Tribune and Times; participated in an advertising agency; subsequently went to St. Paul, Minn., as an artist on the Globe of that city and illustrated for a pictorial print; took the prize for a design commemorative of the Haymarket massacre by Anarchists in Chicago; has been an artist on the Chicago Daily News from 1891 to 1896, and later the leading one on the Times-Herald of Chicago, whose designs daily appeared on the first page of said print. He now occupies the same position on the Daily News. 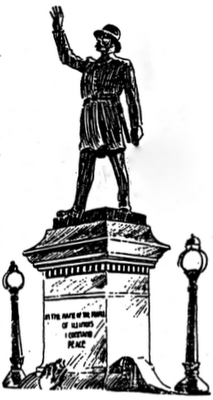 The Haymarket monument was erected to the memory of the policemen murdered by Anarchists. The foundation was commenced December, 1888. The cost of the pedestal and everything complete in readiness for the figure aggregated $5,000. The railings, electric lights and supports, together with the expense of placing the figure in position, added another $1,000. The figure itself increased the value of the monument to $10,000. From the foundation, the height of the pedestal is seven feet six inches. The designer of the figure was Charles F. Batchelder. Res. Ravenswood, Ill., Paulina st.
(Batchelder has not been found in the 1860, 1870 and 1880 U.S. Federal censuses. The Lakeside Annual Directory of the City of Chicago (1876) had the following listings.
Batchelder Charles F. (Batchelder & Co.) r. 817 Wabash av. [residence]
Batchelder James L. (Batchelder & Co.) r. 817 Wabash av. [his father]
Batchelder & Co. (James L. and Charles F. Batchelder) bookbinders 119 5th av.
On October 25, 1892, he had registered to vote in Chicago. He lived at 2819 Paulina Street; the same address as his father. In 1900 he lived in Chicago, Illinois at 2713 Winchester Street. He and his wife Harriet had two children. His occupation was pen and ink artist. In the book Cartoons by Bradley (1917), Luther Daniels Bradley worked at The Daily News in Chicago; his first cartoon published on July 5, 1899. “…in 1900, he was made director of the art department…he had efficient help in the routine of the art department, especially from Charles F. Batchelder, his assistant and friend…”
Ten years later, the Batchelders remained in Chicago, having moved to 656 Sheridan Road. He worked as a newspaper artist. In 1920 the family was at the same address. Retired from newspapers, he was recorded as a librarian in the advertising illustration business. In the 1930 census, he and his wife lived with their youngest daughter, a widow, and her son, in New Trier, Illinois at 120 Woodbine Avenue. The Chicago Tribune reported the passing of his wife on June 17, 1944. Batchelder passed away on September 3, 1947. The Cleveland Plain Dealer published the news on the fifth.
Cartoonist Dies
Chicago, Sept. 4—(AP)—Charles F. Batchelder, 94, newspaper cartoonist many years and retired head of Chicago Daily News art department, died last night. He was a native of Cincinnati. Batchelder began his newspaper career in 1880, working at various times on the Chicago Tribune, the old Chicago Times-Herald and the St. Paul Globe. He joined the Daily News staff in 1893 and retired in 1918.
A link to four Chicago Daily News photos of Batchelder is here. A photo of the Haymarket Moument is here.)