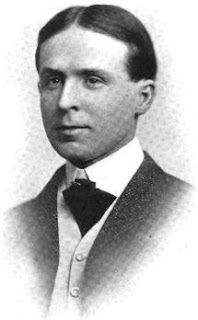 By Alfred Colle.
(History of Minneapolis, Gateway to the Northwest, Volume III, 1923)
“Charles Lewis Bartholomew” is the notation entered on the records of Lucas county, Iowa, indicating the birth of a son to Colonel Orion Alexander Bartholomew and Mary (Smith) Bartholomew. The entry was made on the 10th of February, 1869.
To the reader of the daily newspaper and the political magazine, however, the man who has been the creator of so many striking political cartoons is known at “Bart.” But Bart is not known alone to those who find a happy flash of humorous treatment in a picture editorial. Hundreds of audiences have listened to his famous chalk talks. And many hundreds of men and women, acquiring the fundamentals of illustrating, recognize the well known signature at the end of kindly letters of instruction and criticism which they receive from him as dean of the Federal School of Illustrating and Cartooning.
Bart went to the Iowa State College long enough to take all the mathematics that But writs of replevin and restraining orders held no interest for Bart. When his mother read to the family group, Bart would illustrate the action of the story with charcoal sketches. In the school room when the going became too slow for his active mind he relieved the tedium by drawing pictures.
Bart’s idea of doing something, however, was running a newspaper, and at the age of seventeen, his father, having acquired the Chariton Herald, gave him the chance to be its editor and guiding genius. It is said of him that in the full burst of his editorial dictatorship he slammed a story of the local discovery of a coal mine into the back page and ran the first page full of locals. In other words, he played up the human element.

Bart went to Iowa State College long enough to take all the mathematics that an engineering course could give, acquired a Bachelor of Science degree, a captain’s commission in the Iowa National Guard, Henry Wallace, secretary of agriculture as a roommate, and the acquaintance and good will of Miss Ella Louise Henderson of Monticello.
Miss Henderson and Bart were married on the 17th of June, 1890. Three sons have been born to them: Orlo Alf, Robert Henderson and Charles Lewis, Jr.
Shortly after graduation Bart began newspaper work as a reporter in Minneapolis; he became staff correspondent and later cartoonist. For a score of years he was in active management of the art department of the Minneapolis Journal, with front page cartoons on political subjects and current events. Bart has the distinction of being a pioneer in the newspaper cartoon field, not only in the Northwest but in the country at large, the Journal being one of the first papers in the United States to use the daily cartoon feature. Bart literally created the department in which he has made a name. His idea met with immediate success and has grown from year to year until today Bart’s cartoons are known around the world, and the Journal and Minneapolis are familiar names to many abroad who otherwise might never have heard of them.
A contemporary writer, James Gray, at one time mayor of Minneapolis, said of Bart: “In this long period of twenty-five years he has drawn daily cartoons, missing very few days of publication, an enormous drain upon the invention of any man, no matter how prolific. Bart draws cartoons as the editorial writer writes articles, from the news of the day. He is an editor in outline. His cartoon is a first-page editorial, couched in the most telling phrases and simplest grammar.” Bart’s cartoons in the Journal have been reproduced in every part of America and in England and European countries, by many daily papers and magazines. Even in far-off Australia they are frequently reproduced. In his book, “The Americanization of the World,” W.T. Stead says: “One of the most capable cartoonists in the United States is Mr. Bart of the Minneapolis Journal.” In this book and also in Mr. Stead’s magazine, The European Review of Reviews, Bart’s cartoons have appeared more frequently even than in the American Review of Re­views, whose editor, Dr. Albert Shaw, says: “The esteem in which the Review of Reviews holds the political cartoons that appear in the Minneapolis Journal is sufficiently shown by the frequency with which it has reproduced them. Mr. Charles L. Bartholomew of the Journal, whose work is signed ‘Bart,’ has not merely a very ingenious and ready pencil, but he has a remarkable political instinct that makes his drawings to a very unusual extent valuable as elucidating the situation or reenforcing an editorial position or point of view.”
For a period of fifteen years, the American Review of Reviews, Literary Digest, Current History, and leading metropolitan magazines used more cartoons from Bart’s pen than from that of any other artist. His cartoons were compiled annually in “Pictorial History of World Events” for a similar period. Rand McNally & Co., published six books of juvenile caricature illustrated by Bart. Of the wonderful advertising value of Bart’s cartoons, B.O. Flower, the editor of the Arena, has said: “We doubt if even the management of the Journal fully appreciated the enormous value of Bart’s work in familiarizing the reading world at large with the name of his paper. In the 1922-1923 edition of “Who’s Who in America,” Mr. Bartholomew is credited not only with ten volumes of current cartoons for the Journal and illustrating six juvenile books by W.A. Frisbie, published by Rand McNally & Co., Chicago, but also with twelve textbooks on “Illustrating and Cartooning” for the Federal Schools, Incorporated, Minneapolis, and his new book on “Chalk Talk and Crayon Presentation,” published by Frederic J. Drake & Company of Chicago and the Bart System and Basic Stunts issued by Bart Supplies.

Bart has used his crayon continuously for high school and college audiences and in lecture work and entertainment. He is the editor of a complete and com­prehensive system which has served as the basis for many a chalk talk artist and lecturer using crayon presentation. In compiling information for student use in illustrating and cartooning, he puts in practical form, information from the highest sources among the modern illustrators and cartoonists, using his ability as reporter and editor, rather than depending alone upon his own individual experience. His strength in educational work lies in his ability to secure from these practical sources, latest methods used in the reproductive art. He is recognized among members of his profession for originality in clear presentation of practical requirements of the illustrator and cartoonist.
In his political views Mr. Bartholomew is a stanch republican and through his cartoons has wielded great influence in party affairs. His religious faith is that the Congregational church. He is identified with Plymouth church of Minneapolis, where he holds the office of church clerk. In an address given at a banquet in Bart’s honor by Minneapolis business men, at the end of twenty-five years of editorial and cartoon work, Dr. Harry P. Dewey, pastor of Plymouth church said that if Mr. Bartholomew’s services were available he would choose him as assistant pastor because of Bart’s able assistance in popularizing the vesper services conducted by the church. His chalk talks before factory workers, business organizations, schools and colleges have brought him, throughout his career as cartoonist and editor, into personal contact with his readers. Mr. Bartholomew is Dean of the Federal School of Illustrating and Cartoon­ing and at the present time is devoting his entire attention to editing textbooks and conducting instruction in the course in Illustrating and Cartooning, in which some ten thousand students are studying practical drawing by correspondence. The students are from every English speaking community in the world.
Bartholomew portrait from A Half Century of Minneapolis (1908)
[Charles Lewis Bartholomew was born in Chariton, Iowa on February 1, 1869. He was recorded in the 1880 U.S. Federal Census, the 1885 Iowa State Census, and the 1895 Minnesota State Census. His father was a lawyer and farmer. In the 1900 census he, his wife, three sons, brother, sister and a boarder lived in Minneapolis, Minnesota at “623 18th Street East.” Bartholomew was a cartoonist. He contributed several Saturday series cartoons to the Minneapolis Journal in the 1900s; one of them was the Shanghai Twins. Ten years later they lived next door at number 625; he continued his newspaper cartooning. In 1920 he lived at 2809 Irving Avenue. His occupation was editor for an engraving company. He remained at the same address, as recorded in the 1930 census, with his wife and servant. He was the dean of an art school. Bartholomew passed away on February 15, 1949 in Minneapolis, according to the Minnesota Death Index at Ancestry.com. Two collections of his editorial cartoons can be viewed and downloaded at Google Books: Cartoons of the Spanish-American War and Expansion, Being Bart’s Best Cartoons for 1899.]