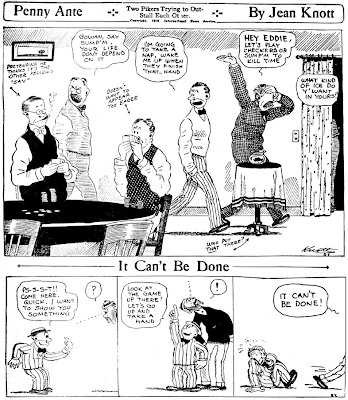 In the mid-teens, some weekday Hearst strips suddenly sprouted companion features. These features were meant to be used sort of like the Sunday toppers of a decade later — if the paper didn’t have the space they could be lopped off. An extra benefit of these daily ones was that the companion feature could be clipped off and run elsewhere in the paper or as ROP, a nice little boon to page composition.

Jean Knott’s Penny Ante (aka Eddie’s Friends) used these weekday companion features much longer than the other Hearst bullpenners. The first companion strip to it was It Can’t Be Done, an unassuming feature that used the same tagline every day. Although the temptation is to say the idea was too limited to last, the strip is rather like There Oughta Be a Law and They’ll Do It Every Time, so I guess no idea is so limited that someone can’t flog it for decades.

Knott included It Can’t Be Done with Penny Ante from  June 13 to September 25 1916, and then replaced it with Let the Wedding Bells Ring Out, a companion feature that proved popular enough to also run on its own for many years.

Thanks to Mark Johnson for the samples!

2 thoughts on “Obscurity of the Day: It Can’t Be Done”