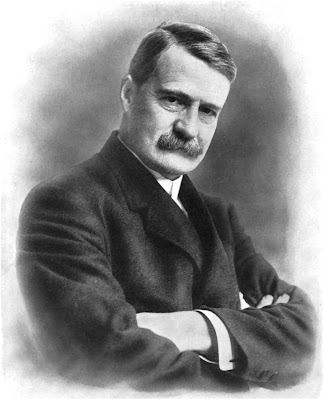 The Philadelphia Inquirer (Pennsylvania), 1/11/1917
Luther D. Bradley
Chicago, Jan. 10—Luther D. Bradley, for many years cartoonist of the Chicago Daily News, died of heart disease at his home last night [January 9]. Mr. Bradley’s political and war cartoons have attracted international attention. Some of his original drawings hang on the office walls of foreign Cabinet Ministers.
Bradley was born in New Haven, Conn., in 1853. After a course in Northwestern University, and graduation from Yale in 1875, he entered his father’s real estate office in Chicago. In 1882, however, his ambitions underwent a change. After traveling extensively he became interested in newspaper work in Australia. He drew cartoons for Australia Tid-Bits, Melbourne Life and Melbourne Punch. Bradley was fond of athletics and was of athletic build. While at Yale he was a member of the rowing team. He is survived by a widow and four children.
(In the 1860 U.S. Federal Census, Bradley was the oldest of two children born to Francis and Sarah. They lived in Chicago, Illinois. Ten years later he was the oldest of seven children. They lived in Evanston, Illinois. In 1880 the family remained in Evanston; Bradley’s occupation, like his father, was money loaner. In 1900, Bradley’s mother, a widow, was the head of the household. They lived in Evanston at 1624 Hinman Avenue. Bradley’s occupation was artist. The 1910 census recorded Bradley, his wife, three children, sister and two servants in Wilmette, Illinois at 822 Michigan Avenue. He was a newspaper cartoonist. Four months after Bradley’s death, Cartoons by Bradley was published. The book, an appreciation with a biographical sketch, includes seven photos and a wide selection of his cartoons from Australia and Chicago newspapers. You can download the book here. A Bradley profile is here.)

Bradley was eulogized in Cartoons Magazine in their March 1917 issue: 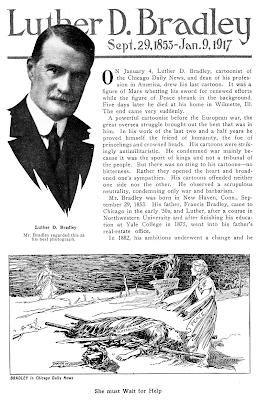 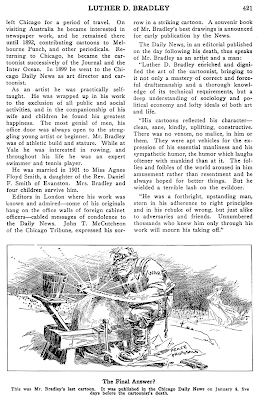 One thought on “News of Yore: Luther D. Bradley”