The Stripper would like some Christmas presents from his readers.As always, the stocking stuffers I crave are answers to my newspaper comics questions. Here are two that have me stumped right now. Can you help? 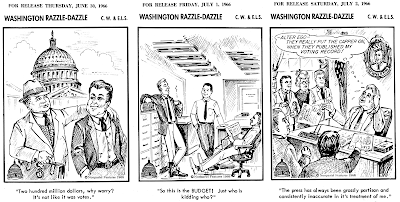 I have three weeks of 1966 proof sheets for a panel cartoon titled Washington Razzle-Dazzle. It was distributed by Nonpariel Features out of Canton Ohio and the panel creators were Erlyn L. Smith and C. Winebrenner.

The feature sports ‘gags’ that are more like the fumings of a spittin’ mad Tea Partier than anything resembling actual jokes — these guys were way ahead of their time!

Can you shed light on any aspect of this? I know nothing of Nonpariel Features, or the creators, or the panel itself. Have you seen it running anywhere? 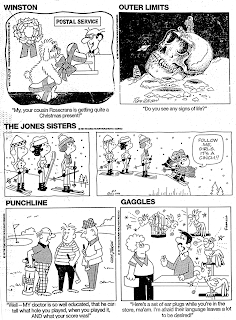 This gaggle of gags is from the Fort Gibson (OK) Times, December 4 1991. They are all copyrighted to The Comic Factory, which I’m guessing was run by Ed Gillum. Gillum signed Winston and The Jones Sisters, and both Punchline by Chris Johnson and Gaggles by Francis sure look like they are by Gillum working under pseudonyms. Outer Limits, signed Ron Wilson, is a little harder to tell because the figures are so small I can’t really get a sense of the art style.

A photocopy of this page from the Fort Gibson Times was sent to me by a correspondent, but I’ve asked him several times for more information (like — did these run more than once?) and I get no answer. I’ve also sent an email to an artist named Ed Gillum in California asking if he’s the same guy who ran the Comic Factory, but have heard nothing back. So, does anyone have any information to break this conspiracy of silence??

4 thoughts on “A Pair of Mysteries”