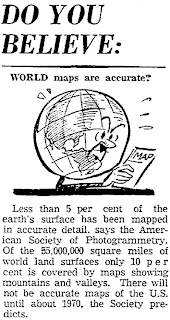 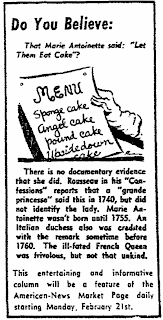 One of the entries on my E&P Mystery List is Do You Believe, a feature listed in their directories from 1955-1962 as a daily panel cartoon by Steve Feeley and Ed Kuekes. The feature was finally unearthed by Alex Jay in the Aberdeen American-News. He sent me samples which you see above.

This illustrates one of the problems with relying overmuch on the E&P listings. Do You Believe is, in my opinion, a column feature with an incidental illustration, not a panel cartoon. As such it does not qualify for listing in Stripper’s Guide. It is a great case in point for the principle that I must see a feature with my own beady li’l eyes before it gets listed in the Guide.

Sorry to sound like I’m on my high horse about this, but I sure do wish others would set the bar a little higher rather than making claims based solely on E&P listings. You can find Ed Kuekes bios in which this feature is described as a panel cartoon, or even a panel cartoon strip (whatever that is) on several sites on the web. Sigh.

One thought on “Obscurity of the Day, Disqualified Division: Do You Believe”