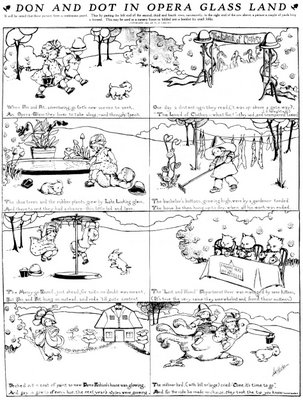 Here’s a rarity from the Cleveland Leader called Don And Dot In Opera Glass Land. This Sunday strip was written by Louise Hunter and drawn by Lillian Woolsey Hunter. Lillian is apparently known for her glamor girl postcard designs from the 00s. Here’s a website that shows a few of her productions.

This series in the Leader ran from February 22 to April 19, 1914. Though I only saw four strips in that period, I suspect that the microfilm was missing some sections of the Sunday papers, so it may well have run every week, and also may have lasted longer than the dates I’m citing.

The first installment carried a copyright to the Hunters (sister, I’m guessing?), while the rest of the series was copyrighted to W.P. Leech. Leech may have been an entrepreneur trying to syndicate the feature, the owner or manager of the Leader, or perhaps just another family member. No way to tell based on the little information I’ve been able to gather.

Interesting to me is the art style, which doesn’t match that of Hunter’s postcard work. It is, however, practically a dead ringer for Rose O’Neill. While many women cartoonists emulated the A-list of their gender (O’Neill, Drayton and Brinkley), rarely have I seen one of the imitators do such an outstanding job of imitation.