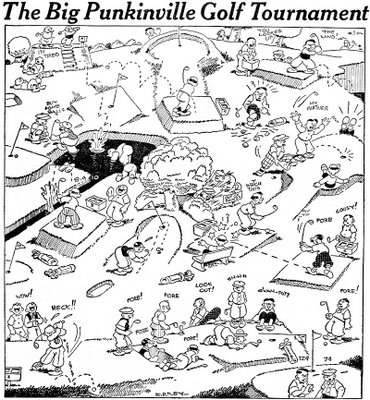 This obscure panel cartoon ran on the weekly Associated Editors kiddie page. Back in the 20s and 30s, many syndicates offered a weekly page to newspapers with a whole range of features intended for the youngsters. Most pages had a cartoon or comic strip, puzzles, games, activities, hobby projects, contests and so on. The concept survives today in slightly less ambitious scope with features like Shortcuts and the Mini-Page.

The Associated Editors page featured a number of comic strips over the years, the most successful and long-running of which was The Adventures of Peter Pen. Today, though, we’re looking at Punkinville, a feature that ran sporadically on the page, with often as much as eight weeks elapsing between appearances. The feature always showed a bird’s-eye view of some activity or get-together in the titular village, and was rewarding enough if you took the time to study all the little vignette gags. To me the feature always seemed a little out of place on the page – the subject matter (like the golf tournament shown here) seems more likely to interest adults than children. Perhaps that’s why it appeared so infrequently; the editors knew it was a weak part of the page.

Punkinville first appeared on October 30 1927, a date that makes you wonder if it was originally meant as a one-shot for Halloween. It lasted until May 3, 1931.