The Elmira Telegram, 1/12/1890
They Aquit Themselves Proudly in Welcoming the State Grand Counsellor.
The six local councils of the order of United Friends gave an entertainment at Odd Fellows hall last evening in honor of the official visit of Grand Counsellor Dr. Eli H. Long, of Buffalo….Master Claude Toles did himself proud in his recitation “Adam and Eve.” He was decidedly a feature of the entertainment….

The Pupils of School No. 2 Grandly Observe Arbor Day.
The Elmira Telegram, 5/4/1890
…A chorus forest song by the entire school and the audience was invited to witness the dedication of the trees out of doors. The school children marched out to the inspiring martial music of two piccolos, two snare drums and a bass drum. An open air chorus, “Plant the Trees,” was sung, and then the first tree was dedicated…Claude Toles and Louis Uttrich, of the sixth grade, dedicated an elm tree to J.T. Trowbridge….

Williams’ Directory of Elmira City 1892
Toles Claude E., clerk, 311 E Water, bds 330 E Centre
Williams’ Directory of Elmira City 1893
Toles Claude E., artist Telegram, bds 324 E Centre
Elmira Telegram
The Telegram was a Sunday newspaper and Toles was on the staff in April 1893, if not earlier. Old Fulton New York Postcards has copies of the 1893 Telegram from April 30 to December 31; the April 30 issue has seven spot illustrations featuring portraits and column headings by him. He illustrated events like train wrecks, factory explosions and executions, plus portraits of politicians, performers and buildings, and, of course, editorial cartoons. Below are samples of his artistic versatility. 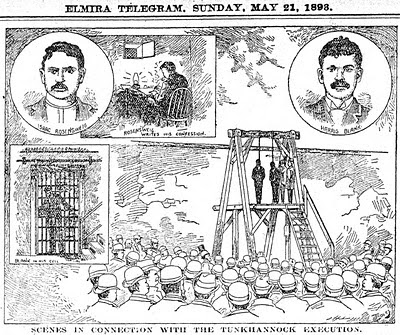 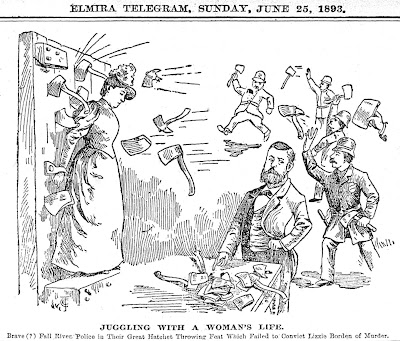 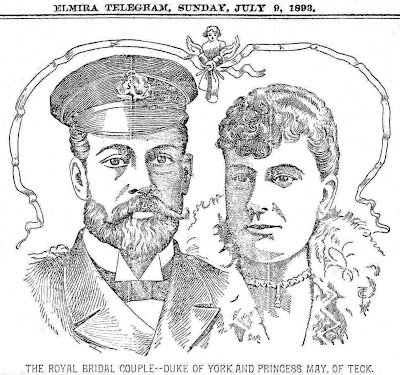 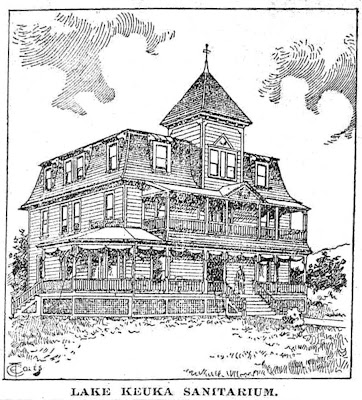 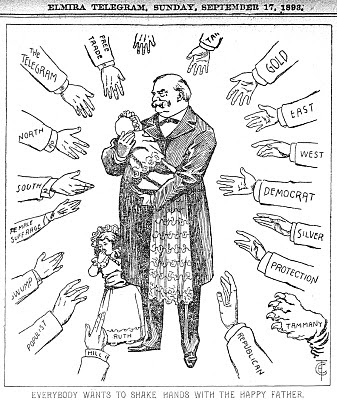 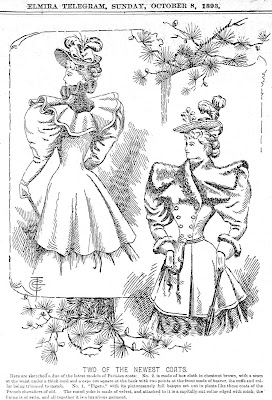 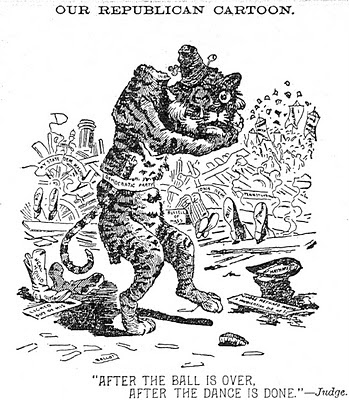 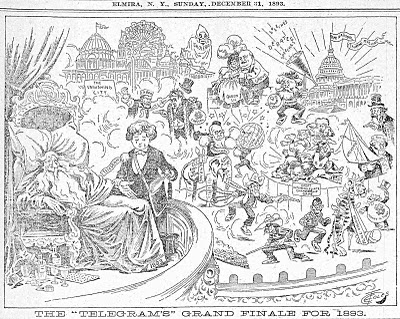 And We Appreciate the Fact.

The Elmira Telegram, 1/21/1894
[From the Horseheads Reporter.]
The Telegram last Sunday contained an excellent cartoon, representing President Cleveland endeavoring to solve the mysteries of the Hawaiian puzzle. The picture was a palpable hit, the idea being very pat and the delineation first class. The sketch was designed and drawn by Claude Toles, a bright young artist of the Telegram force, and proves conclusively that he possesses both talent and originality—essential elements of success in his peculiar field.

Cartoonist of Much Promise.

The Elmira Telegram, 2/18/1894
[From the Elmira Star.]
The Observer has noted with increasing pleasure the work of young Claude Toles, who of late has been doing some of the caricaturing on the Telegram. The writer learns that Manager Brooks found him one day in the rear part of a dry goods store marking boxes with a brush and black ink. He was struck with the deft manner in which the youth handled the brush, and told him to come up to the Telegram office and he would do something for him. The result was that C.E. Toles is now drawing good pay for doing one or two funny pictures a week. The Observer notes that the caricaturist has a very wide and clear conception of the political situation and does his work so that it speaks for itself, and the Observer desires to observe that if this young man perseveres and studies, sticks to Mr. Brooks and does not allow his head to get too large, he will in short time make his mark in the profession he seems to have such a cinch upon.

Elmira Daily Gazette and Free Press, 8/23/1894
C.E. Toles, the Telegram staff artist, has resigned his position with that paper, having been with the Telegram for nearly two years. Mr. Toles accepted a position with a southern firm and will do his work at home hereafter.

Elmira Daily Gazette and Free Press, 4/25/1895
Claude E. Toles, the caricaturist and cartoonist, is recovering from a six weeks illness of grippe and typhoid fever and will soon be able to be upon the streets.
Has Recovered.
The Elmira Telegram, 6/30/1895
C.E. Toles, the well-known newspaper artist, has nearly recovered from a long illness of pneumonia.
Hanford’s Elmira City and Elmira Heights Directory 1896
Toles Claude E., artist, h 503 Baldwin
Miss High Kick 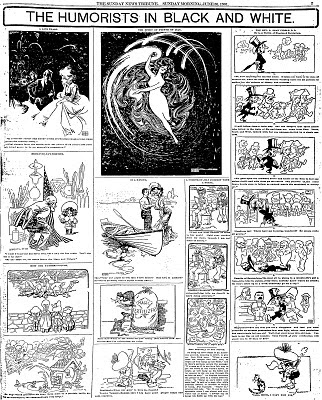 Duluth News Tribune, 7/28/1901
Panel 1
Mr. Bobbin—”Young man, do you smoke cigarettes?”
Little Boys—”Oh! no, sir. Tobacco contains nicotine, one drop of which will kill a dog. Cigarettes cause organic disturbances of the brain, stomach, heart, lungs and liver, ending in St. Vitus’ dance, epilepsy, dyspepsia, apoplexy, bronchitis, consumption, insanity and death.”
Panel 2
Mr. Bobbin—”Oh! well, if you feel that way about it I’ll just throw away this box of cigarettes I was going to give you.”
The Rev. O. Shaw Fiddle, D.D.
A selection of strips is here.

Item
Elmira Daily Gazette and Free Press, 10/30/1901
Word comes from Baltimore that Claude E. Toles, formerly of this city, is the winner of a billiard tournament recently finished in that place. Twelve crack Baltimore players contested for four prizes and Mr. Toles won first place and a beautiful billiard cue.
Claude E. Toles
Death of the Well Known Artist Who Formerly Resided in This City.
Elmira Daily Gazette and Free Press, 12/17/1901
Claude E. Toles, a former well known resident of this city died last evening at 6 o’clock, at the home of his father-in-law, Dr. E.G. Drake, at Cornwall-on-the-Hudson. A telegram to that effect was received in the city last evening by the deceased’s mother, Mrs. Estelle M. Toles, widow of the late Wallace Toles, who resides at 503 Baldwin street. The particulars of the unexpected demise of the young man have not been learned. For a couple of years past he has resided in Baltimore.
Claude E. Toles was twenty-five years old. He was born in Elmira and was educated in public schools here, later being engaged as clerk in Harris’ dry goods store. For several years past he has been widely known for his exceptional talent in drawing and cartoon work. He began his artist’s career with the Elmira Telegram. In a short time he was able to conduct his work independently, until he received an offer from the New York Herald which he accepted at the same time contributing considerable work to other illustrated periodicals.
Mr. Toles’ ability was widely recognized and he became connected with an art syndicate publishing company in Baltimore, which position he occupied at the time of his death. He secured the high place in his work not alone through ability, though that was exceptional, but his indefatigable energy and perseverance were always noticeable and worthy of emulation.
The deceased was a few years ago married to Miss Maude Drake, daughter of Dr. E.G. Drake, a former West Church street physician. He is survived by an infant daughter besides his wife and mother. The remains will be brought to Elmira for interment.
Claude E. Toles.
Elmira Daily Gazette and Free Press, 12/18/1901
The body of the late Claude E. Toles arrived in the city over the Erie this morning at 3 o’clock and was taken to the home of his mother, 503 Baldwin street, where the funeral will be held at 2:30 o’clock Thursday afternoon. The interment in Woodlawn will be private. Rev. Dr. Henry will officiate.
Pencilings.
Saturday’s Column of Fact, Fancy and Gossip.
Elmira Daily Gazette and Free Press, 12/21/1901
When Claude E. Toles the artist, whose untimely death this week came as a severe shock to his friends, first entered business life it was as a cash boy in a dry goods establishment in this city. In that capacity he failed to reach the degree of excellence attained by the model cash boy who rises step by step until he becomes a member of the firm and hires boys himself. Young Toles, on the contrary, spent most of his time at the counter where the wrapping paper was stored and there were few customers who did not carry home evidence of the genius that was in a few years to make him one of the best known newspaper illustrators in the land. The proprietors of the dry goods emporium decided at various times to discharge Toles, but they would run across some humorous sketch he had drawn and laugh and give him a new lease of life, which showed, perhaps, that they were human but not good business men. About the time that Toles business career hung in balance his work came to the notice of “Zim,” the famous cartoonist of Judge, who, with other friends, started the young man in the right direction. He did work for various publications until the goal was apparently reached when he had a page in colors in an Easter number of the New York Herald. Shortly thereafter came a cablegram signed by James Gordon Bennett asking the young artist to go to New York and live and become a member of the Herald‘s staff of artists. The offer was declined and Toles associated himself with a Baltimore syndicate, later retiring to form a similar organization of his own, at the head of which he remained to the time of his death. His work made the service of the syndicate eagerly sought after. It was marked by bold originality and many preferred it to that of Gibson or Wenzell. When the casket was lowered into the ground at Woodlawn this week, after a few comforting words had been said by a good minister, the loss was almost as great to lovers of good, clean drawing as to the bereaved family of the young man.
[A photo of Toles and other cartoonists is here. A look at his talent is here. The Claude Eldridge Toles Collection (1875-1901) is here. A family tree at Ancestry.com said his wife’s full name was Maud Ophelia Drake. She remarried to W.G. Muldoon (mentioned in the June 30, 1903, Elmira Daily Gazette and Free Press), and passed away in 1978. A photo of her is here.]