John Rai McGaw was born in Phoenix, Arizona on September 4, 1896, according to the California Death Index, 1940-1997 at Ancestry.com. According to a family tree at Ancestry.com, he was the only child of William and Minnette, who died before the 1900 U.S. Federal Census. In the census, he lived with his grandparents, Charles and Martha Jenkins, and their children. They lived in Columbus, Ohio at 1364 Summit Street. Apparently, William gave custody of his son to his in-laws. He lived in Columbus with his father.

In 1910, McGaw remained in Columbus but at a different address, 169 Chittenden Avenue. He lived with his grandfather and Aunt Clara. His father had remarried and lived in Columbus. Information on his education and art training has not been found. He was a boy scout and his talent was noted in Boys’ Life magazine. The May 1912 issue published news of the awards by the National Court of Honor: “…Three boys in Columbus, Ohio, John R. McGaw, George Sturgeon, and George A. Siebert, have won merit badges…” The issue dated December 1912 had a list of “Merit Badges Awarded by National Court of Honor” which included McGaw’s badges for “Art, Public Health, Signaling and Swimming”.
A World War I draft card has not been found for him. According to the family tree, he married Winnifred Dorthea Colgrove on February 9, 1918, in Toronto, Canada.
The 1920 census recorded him in Columbus at Columbus 23 North High Street. He was a commercial artist in the newspaper industry. His father was married to his Aunt Clara; they lived with their son Joseph, her father, and his aunt in San Diego, California. The family tree said his father passed away in 1926. The ninth annual exhibition of Cleveland artists and craftsmen was held at the Cleveland Museum of Art in April 1927. McGaw won first prize in the illustration class, as reported, by art critic Grace Kelly, in the Cleveland Plain Dealer on May 1, 1927. Two years later in the April 29, 1929 Plain Dealer, he was awarded second prize in illustration at the May Show. In June his work was shown at the Kokoon Club, and Kelly wrote, “John McGaw’s illustrations looked strong and human.”
In 1930, McGaw, his wife and seven-year-old son Gordon lived in Shaker Heights, Ohio at 3326 Lansmere Road. He occupation was magazine illustrator. His illustration “In Chinatown” was noted by Kelly in the May 25, 1930 Plain Dealer. In January 1933, the Cleveland Museum of Art exhibited original cartoon art and caricatures by 90 artists. The exhibit included work by 15 Clevelanders including McGaw’s caricatures from the Cleveland News, according to the January 15, Plain Dealer. In 1935 he was one of two cartoonists who drew the panel Local Oddities. One of McGaw’s Cleveland Press cartoons (1936) is at the Cleveland Centennial site. 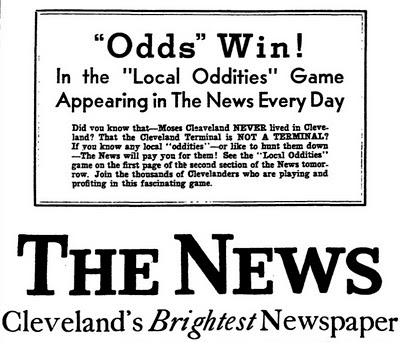 Detail of Cleveland News ad in the Plain Dealer 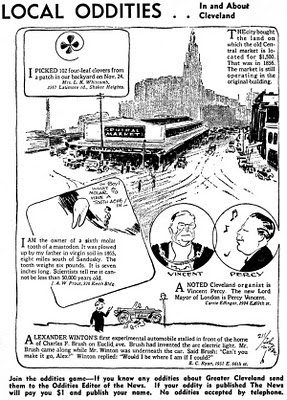 He signed his World War II draft card on April 27, 1942. His employer was the Cleveland News. His description was five feet eleven inches, 190 pounds, brown eyes and hair. The original art for his 1944 cartoon, “The Only ‘Indispensable’ Man”, is at the Wolfsonian. On May 9, 1944, the Plain Dealer announced the results of the Cleveland Newspaper Guild Awards.
BEST CARTOON—To John R. McGaw, Cleveland News, for an editorial cartoon captioned “The Forgotten Man,” which depicted the plight of a family with children attempting to rent living quarters in Cleveland.
That cartoon was exhibited in the annual May Show at the Cleveland Museum of Art. The date of his move to San Diego is not known. He may have retired there because of his relatives. Aunt Clara passed away there on August 2, 1967. McGaw passed away February 12, 1969 in San Diego. His wife Wynn passed way December 18, 1974, in Newport Beach, California. On November 7, 1977 his son Gordon passed away in Newport Beach.