Jeanne L. Harris was born in Lexington, Kentucky on July 22, 1905, according to the Cleveland Plain Dealer obituary and the Social Security Death Index. In the 1910 U.S. Federal Census, she was the fourth of six children born to George and Ann. They lived in Lexington, Kentucky. Her father was a clergyman at a Catholic church.
In 1920 the family of 11 lived in Witherspoon, Kentucky on McCracken Road. The Plain Dealer said she graduated from Western College for women in Oxford, Ohio. In 1930 she was boarding in Cincinnati, Ohio at 423 Probasco Avenue. Her occupation was advertiser at a department store. The obituary said

…She illustrated “Sneakers,” a cartoon featuring grooming and deportment tips; “Easy Etiquette,” cartoon which focused on the do’s and don’ts of daily personal relationships, and “Camping Tips.” She continued “Easy Etiquette” after retirement….

Sneakers, a weekly panel, was written by Mary Strassmeyer. The panel debuted on September 12, 1964. In the Plain Dealer Magazine of May 16, 1965, Harris and Strassmeyer’s cartoon was touted for being picked for syndication by King Features. Beginning on February 28, 1969, Sneakers was published three times a week, Wednesday, Friday and Sunday. On November 18, 1970, the Plain Dealer reported, “Sneakers has a new look…[and] has changed in appearance and content. The drawings are brighter, the captions contain more information and the ideas are coming from teen-agers themselves.” 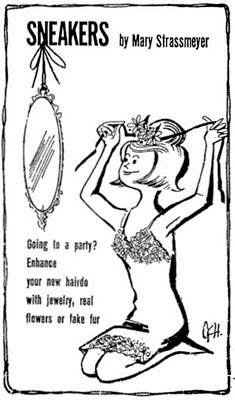 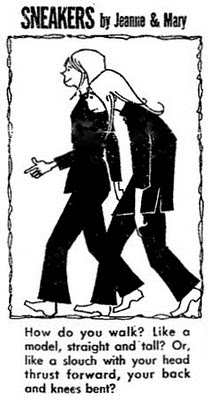 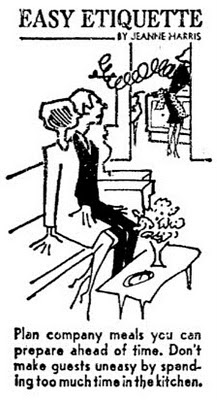 The first Easy Etiquette, 1/8/1967.
Family Camping Tips (published as Camping Tips in some papers) began on March 17, 1967 in the Plain Dealer. It continued to appear papers as late as 1984.