Lad Cerny, 33, an editorial artist for the Cleveland News since October 1934, died yesterday in St. Luke’s Hospital.
Mr. Cerny, who lived at 3521 W. 97th Street, entered the hospital on Monday for an operation which was performed on Wednesday. His wife, Bernice Cerny, arrived at the hospital a few minutes before he died.
Most of his life had been devoted to art and he was a frequent contributor to the May Show at the Cleveland Museum of Art. In 1933 one of his works, a drawing of his mother, won him a prize. Early this year he received an award from the Cleveland Newspaper Guild for his art layout.
His art education was received at the Cleveland School of Art and the John Huntington Polytechnic Institute. He was also a graduate of Benjamin Franklin School.
Surviving Mr. Cerny, besides his wife, are his mother, Mrs. Dorothy Cerny, now in Czechoslovakia; a daughter Kay, and three brothers, James, Joseph and Frank Cerny.
[Ladislaus Cerny was born around 1914 in Cleveland, Ohio, according to the 1920 U.S. Federal Census. He was the third of four sons born to Joseph and Dorothy, both Bohemian emigrants. The family lived in Cleveland at 2514 Tate Avenue. He has not been found in the 1930 census. He was one of two cartoonists who drew the panel Local Oddities. The spelling of his name was found in the Cleveland City Directory for 1938 (4251 W 23d), 1939 (2923 Lincoln av) and 1942 (2624 Portman av).] 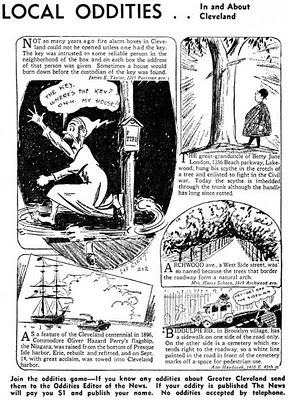