Leslie Elton’s full name is Leslie Elton Brownley. He was born in Lock Haven, Pennsylvania on August 27, 1893, according to his World War I draft card. In the 1900 U.S. Federal Census, he was the oldest of three children born to William and Nina. They lived in Waverly, New York at 118 1/2 Providence Street. His father was a furniture polisher.
The 1910 census recorded W.B. McCaffery, Elton and his two sisters, Maud and Charlotte, in Philadelphia, Pennsylvania at 1611 Girard Avenue. The head of the household was McCaffery, a woman, with Elton and his sisters as her son and daughters. This was an error in the census. Perhaps the wrong name was given to the enumerator or maybe McCaffery belong to the preceding household but inadvertently replaced Nina Brownley. In any event, Nina was the head of the household and a widow caring for her three children, her father Frank, a widower, and his older sister Anna, an unmarried woman. Also, in the household were Hannah Bentley (misspelled “Bently” in the census) and her two sons Robert and Walter. According to the 1860 census, Frank had three younger brothers, William, John and Charles. From the census records, I believe Hannah married either John or Charles and one of them passed away before the 1910 census. Years later, Hannah and her sons would figure into Elton’s life. Frank passed away on May 26, 1911 according to the Philadelphia, Pennsylvania, Death Certificates Index at Ancestry.com.
Elton’s work appeared The Motion Picture Story Magazine. 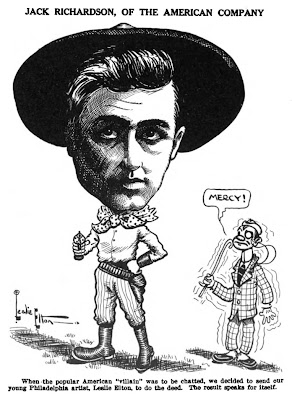 Leslie Elton, the well-known cartoonist, who has contributed to the Philadelphia Record,Public Ledger, Motion Picture Magazine, Photoplay Journal and the St. Louis Globe-Democrat, has joined the forces at the Bray studio, and will contribute his comedy to the Paramount-Bray Animated Cartoons, the weekly animated cartoon released by the Paramount Pictures Corporation. The enlargement of the staff of cartoonists at the Bray Studio will enable the producers to give a great variety of subjects. Mr. Elton will work on variety of subjects.

In the book Before Mickey: The Animated Film, 1898-1928 (1993), Donald Crafton said, “…Elton, a newspaper sports cartoonist, joined in September 1916 and took over the ‘Heeza Liar’ series.” Elton drew himself inking at the drawing board in the November 1916,Cartoons Magazine. 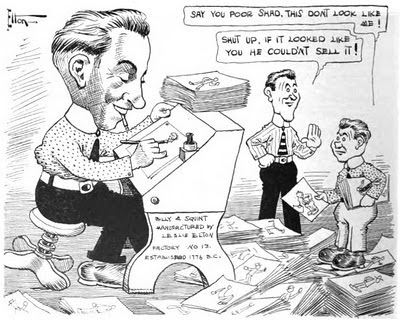 Leslie Elton in His Cartoon Factory— Drawn by Himself
Mr. Elton, remembered for his work on the St. Louis and
Philadelphia papers, has joined the forces at the Bray studio,
and will contribute pen-and-ink comedies for the movies.
Elton signed his World War I draft card on June 5, 1917. He lived in Manhattan, New York City at 112 East 31 Street. He was a cartoonist at the Cameragraph Film Company, 140 West 44 Street, New York City. His description was medium height, slender build with gray eyes and brown hair. The Big Cartoon Database has a list of his work.
The 1920 census recorded him in Ridgefield Park, New Jersey at 112 Hobart Street. His mother was head of the household, which included her daughters and their husbands. Not only was Elton a motion picture cartoonist, but so were his brother-in-laws Vaughan Kaufman and John McManus. Both sisters were motion picture actresses. In 1920 he received a patent. For the Newspaper Enterprise Association Service he produced Jack Daw’s Adventures in 1922; the first eight weeks are here: 1 2 3 4 5 6 7 8.

According to the 1930 census, Elton married for the first time when he was 28 years old, either in 1921 or 1922. His wife was the aforementioned Hannah Bentley, who was born on March 31, 1879, according to the California Death Index. She was 14 years his senior and three years younger than his mother, who was born in 1876. He lived in the Bronx, New York at 3344 Fort Independence Street, with Hannah and step-daughter Charlotte, who was 19. (Back in 1910, Hannah was pregnant with Charlotte.) He was a freelance cartoonist. Living in the same building were Hannah’s sons Robert, a cartoonist for a film corporation, and Walter Bentley. (Robert was profiled at According to Animation: Who and Where.)
The date of Elton’s move to California is not known. Hannah passed away on June 3, 1964 and was followed by Elton on July 16, 1966, both in Los Angeles, according to the California Death Index at Ancestry.com. He was recorded twice in the index as Les Elton and Leslie Brownley. I believe his obituary was published in The Los Angeles Times on July 16. If anyone has ProQuest, please let us know of any additional information.