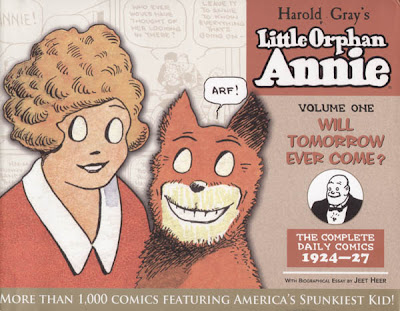 It may come as a surprise to those who aren’t devoted fans of Little Orphan Annie, but this is an extraordinary collection for the simple fact that the book begins with the very first sequence of the strip. So what? Well, when Little Orphan Annie began it appeared in only one paper in the world, the New York Daily News. That alone would make the early strips rare, but compounding that rarity is that the Daily News was considered a trashy tabloid and so it was never collected and bound by libraries. If there are no libraries collecting the papers, and then later disposing them, there are no opportunities for collectors to amass runs of the original tearsheets. The only known run of the first months of the strip is in the Daily News’ own microfilm copies, and that microfilm, which I’ve had the opportunity to review, is an almost unbelievable mess.

I had the idea of publishing the early Annie strips several years ago and I hit this brick wall myself. Faced with the impossibility of finding these strips in anything vaguely approaching reproducible form I waved the white flag and gave up. Luckily Dean Mullaney and company were not so easily dismayed. They had the bright idea of checking the Harold Gray papers at Boston University and it turned out that the archive included an unexpected treasure — an almost complete run of the strip right from the beginning. So, putting aside a wee bit of jealousy, I’m thrilled that finally we have the opportunity to read the saga of that little orphan gal right from the start, including the pivotal early days in the orphanage that have been unseen since they were published over 80 years ago.

And what a story it is! Gray was famed for his despicable villains, and his earliest are truly vile. Miss Asthma, who runs the orphanage in which we first meet Annie, is as rotten and nasty as I’d always imagined. Mrs. Bottle, a hag who works in cahoots with Asthma to ‘adopt’ Annie as slave labor, is similarly chilling. The two, and many who come after in quick succession, as far more repugnant because they represent the sort of characters who were actually known to prey on defenseless children, then and now. A good part of Gray’s genius was in blending fantasy and reality so masterfully that the reader finds himself taken in by the narrative hook, line and sinker, the suspension of disbelief so complete that Annie and her travails are viscerally affecting (yes, I admit it, I got misty-eyed a few times). Only rarely in this early work does Gray lose us momentarily with an awkward bit of storytelling or a fudged plotline, a deficiency he would overcome soon. Even a sophisticated reader, determined to scoff at Gray’s morality plays as mere histrionic melodrama can’t help but get sucked in by the taut storytelling and heart-melting little heroine.

Harold Gray’s artwork, almost woodcut-like in its frozen flatness, would seem to be a terrible handicap for an adventure strip. But somehow Gray makes it work. He freely admitted that he had an almost total inability to portray action scenes, and so these static daily tableaus often devolve into soliloquies in which Annie describes the day’s activities rather than having the action depicted (by the way, one of Gray’s many conceits, yet another that should have hobbled his strip but didn’t, was that each day’s strip represented one day in Annie’s life — no week-long fight scenes in this strip!). In these early strips Gray is already very close to his mature style, and the only stylistic misses are in some rather generic character designs — again, shortcomings that he was already well on his way to overcoming.

The book offers an almost ridiculous quantity of strips — 38 months worth to be specific. While I applaud the publisher for their generosity, I would have gladly traded some of that quantity to rectify two shortcomings. First, although the strips are only reduced by about 15% or so from their original published sizes, Gray’s lettering is a bit hard to read due to the compression. Little Orphan Annie was a very text-heavy strip, and Gray’s lettering was on the small side to begin with — the reduction had me squinting on occasion, especially in the early sequences when the lettering wasn’t quite as bold as it would become later on. My second objection is to the lack of strip titles. For many strips those daily subtitles are perfunctory, but Gray’s were often witty little comments on the day’s doings, or editorial commentaries that could change the way the reader interpreted the day’s strip. I see no reason that they couldn’t have been printed alongside each strip where the book leaves quite a lot of empty space.

My other objection regards the Sundays. The publishers has included a small — very small — gallery of selected Sundays from the period. According to the editorial notes most of the Sundays were omitted because they seldom related to the daily plotlines during this period. That much is true. However, some Sundays did advance the plot, sometimes as a pivotal episode in the daily storyline. The publisher claims that these important Sundays are included. That, unfortunately, is only partly true. Some storyline Sundays are indeed included but a number of important ones are not. And in Little Orphan Annie at this time there was no Monday recap to save us if we missed the Sunday. This is an error that’s pretty hard to forgive when you’re reading along and all of a sudden you’re completely mystified at a major gap in the story.

Even the Sundays that are reproduced are a bit of a joke. Each one is 7″ tall by 4.5″ wide, two to a page. I may not be the eagle-eyed kid I once was, but I don’t think many readers could read these strips without a magnifying glass, a crutch that I had to fall back on. Did it not occur to the publisher that they could have printed one Sunday per page, sideways? There’s only eleven Sundays included, so would it really have broken the bank to allot them twice that paltry page count? I certainly hope this grievous error in judgment is rectified in subsequent volumes. And if the color is just too expensive I for one would be just as happy seeing the Sundays in black and white. Color was definitely not Gray’s strong suit — in fact I think his later Sundays, from the 30s on, are much more attractive in black and white or with the single spot color that was sometimes used on the Annie Sundays at less affluent papers.

In addition to the strips we also get a fabulous biographical essay on Gray by Jeet Heer. Gray was an infamously private man and Heer has uncovered many interesting and intriguing new facts (new to me, anyway) about the man behind the strip. Very highly recommended reading. And I can’t close (or leave well enough alone) without also noting Dean Mullaney’s introduction in which he sets the stage for the strip with an impressionistic piece about the 1920s. Oddly, Mullaney sees fit to let loose with an expletive, granted a very mild one, in the first paragraph. I guess I’m one hell of a prude that way, but this seemed very weird to me. Give stuffy librarians an excuse to keep the book off of school shelves, Dean. Goodness knows we don’t want to have classic strips fall into the hands of the next generation!