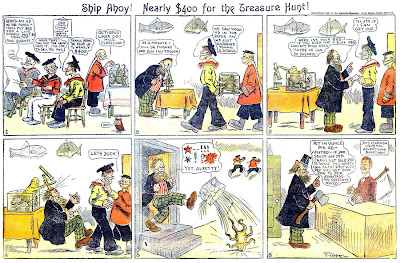 One last Opper obscurity today from the files of Cole Johnson. Ship Ahoy ran from February 2 to May 17 1908. At this point in the story the gobs are trying to raise funds to go searching for a treasure. Unfortunately its been ages since I read these strips so I don’t recall if the story ever finished playing itself out — I suspect it did, which would make it a very early example of a closed-end strip.

Cole contributes these notes: “Here’s a short-lived 1908 strip about mischievous sailors. There’s a Katzie episode where these sailors sell the kids a hell-raising parrot in the first panel, signed by Opper. Note the German Octopus-buyer goes to the office of the “Morgan Journal”, the elusive Duetsches sprecht version of the N.Y.Journal.”