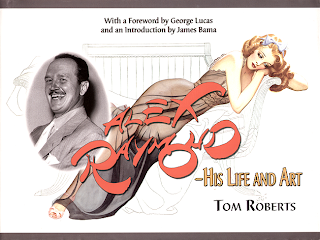 Alex Raymond – His Life and Art

The warning bells started going off not long after I opened this eagerly anticipated book. On page four the author tells us that the Buck Rogers strip was syndicated by NEA. Then a few pages later he tells us that When Mother Was a Girl was the topper to Blondie and that Dumb Dora was Chic Young’s first syndicated strip. These errors aren’t exactly earthshaking I suppose, but such details, all of which could have easily been fact-checked, don’t speak well for the quality of the research that went into this book.

I soldiered on, though, and found that Tom Roberts is certainly an expert on all things Raymond. Only when his story has to touch on other creators and comics does his expertise take a serious fall. In fact Roberts is such a Raymond fanatic that his devotion to the subject ends up being the real source of the project’s undoing. The book is chock full of rare Raymond artwork, but that material is presented in lieu of long loving looks at Flash Gordon, Secret Agent X-9 and Rip Kirby art, the sort of material that this reader presumed would be given more play in a Raymond bio. We do get some material from all those strips, of course, but the book is chock full of all manner of oddball Raymond work — movie poster designs, pulp illustrations, ad campaigns, etc. It comes across as if the author is trying to impress us with the breadth of his Raymond collection which, don’t get me wrong, is indeed astounding. The sense that the book was put together by a Raymond collecting wonk is highlighted when the author occasionally switches to first-person commentary explaining just how rare such-and-such an item is and how many eyeteeth collectors would gladly trade for it. Nowhere is that wonkish attitude more vividly apparent than with an utterly pointless two page sidebar detailing how an auction house approached the author to authenticate an unsigned painting as being the work of Raymond.

Some of Raymond’s rare artwork could just as well have stayed under wraps, too. For instance, we get fourteen pages of art from the juvenile book Scuttle Watch, and another ten from an insurance ad campaign. In neither case did Raymond produce particularly distinguished work (at least by his lofty standard), so I would have much rather seen a few representative images from those venues and allotted some of that space for more of Raymond’s best works. Roberts has the collector’s myopia — his devotion to Raymond leads him to focus more on minutiae than on what made Raymond famous.

And speaking of minutiae, a fifty page chapter detailing Raymond’s service in World War II is enough to test the patience of even the most devoted reader. Raymond served on the U.S.S. Gilbert Islands, an aircraft carrier that I now know in such intimate detail that if I materialized on its deck I think I could find the mess hall blindfolded. I dutifully read the whole chapter, a feat few will or should attempt, and got treated to a detailing of that ship’s activities that might be fine military history but goes ridiculously far afield from telling the story of Raymond’s life. Here’s a taste: “The Gilbert Islands was an escort carrier of the CVE 105 Commencement Bay class. With a displacement of 23,200 tons, she carried a 28-foot draft. Not as big as her sister carriers of the Essex class, the Commencement Bay class had a flight deck spanning 500 feet…” etc., etc., ad infinitum. Look, If I wanted an exhaustive history of the Gilbert Islands I’d buy one. Any competent editor would have slashed this chapter by 30 pages without losing anything of Raymond’s story.

It’s hard to imagine that a book so lovingly produced, about one of the greatest cartoonist/illustrators of the twentieth century, could fall so far short of what it could and should have been. And yet, even though the book is flawed in a whole variety of ways, I still have to give it a pass. Even a cocktail napkin doodle by Raymond is worth a look, and so a whole book chock full of his art, despite the questionable choices made in the selection, is a joy to behold. And since this is the most complete biography we’re ever likely to have of the great penman it’s a book that, flaws and all, deserves a place on any fan’s bookshelf.

PS — for those keeping score, Buck Rogers was syndicated by John Dille, When Mother Was a Girl was the topper of Dumb Dora, and Chic Young’s first syndicated comic strip was The Affairs of Jane.

One thought on “Stripper’s Guide Bookshelf – Alex Raymond: His Life and Art”