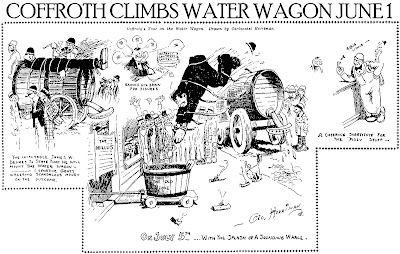 Tuesday, May 28 1907 — As best I can figure out, boxing promoter Jim Coffroth is doing everything possible to reassure the public of a fair fight on July 4 between Tommy Burns and Bill Squires. A recent match in San Francisco had been revealed to be a scam and Frisco politicians were grumbling about making the events illegal there. Apparently Coffroth, trying to give the impression of angelic innocence all around, has vowed not to have a drink until the fight has come off. What that has to do with throwing a fight I have no idea. 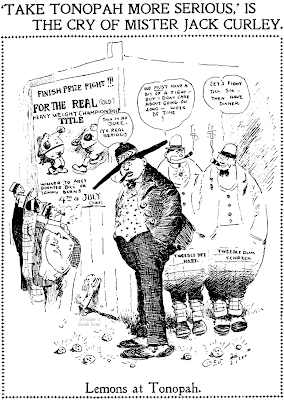 Wednesday, May 29 1907 — Slightly over-the-hill fighters Marvin Hart and Mike Schreck are to box at Tonopah Nevada tomorrow, and promoter Jack Curley is billing it as the greatest fight ever staged at that popular venue. The boxing world collectively heaves a yawn over the news.