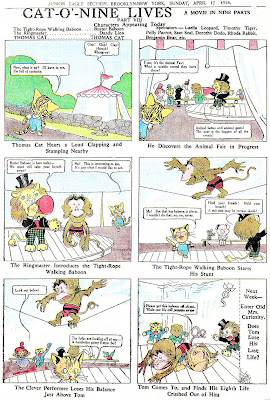 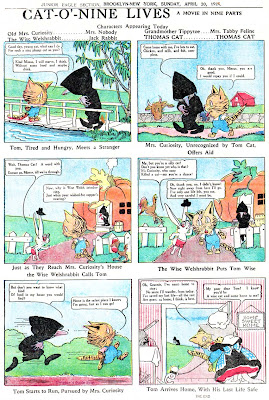 The Brooklyn Eagle maintained a really good locally produced children’s section from the oughts right up into the 1930s. In addition to the mainstay of Buttons and Fatty (which we’ll cover one of these days) they frequently had one or two additional color strips in the section. In the 1920s many of these were produced by the team of writer Jane Corby and cartoonist Phila Webb.

I know nothing about these two ladies, but I’ve always visualized them as two happy old spinsters. I imagine them living together in a picturesque old brownstone in Brooklyn, telling stories to the neighborhood children on the front stoop in the afternoons.

Cat-o’-Nine-Lives was a nine part closed-end series that features the death of a kitten as the denouement of each episode. How, um, precious. This particular series was only credited to Phila Webb, but I suspect that Jane Corby did the writing. It ran from February 24 to April 20 1924.

One thought on “Obscurity of the Day: Cat-o’-Nine-Lives”