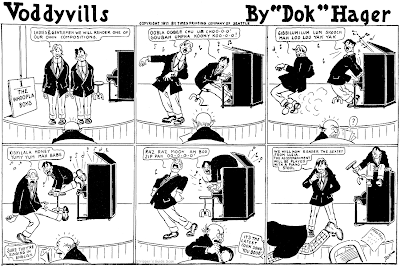 Well, there’s obscure and then there’s Obscure. Here’s a prime example of that purest of breeds, Voddyvills by John ‘Dok’ Hager. Hager was a cartooning fixture at the Seattle Times from the 1890s until the mid-20s when he retired because of eye trouble.

Hager was the artist on the Umbrella Man weather cartoons, a front page feature of the Times that traded off the fame of a local eccentric. He’s also the author of a series I’ve so far not had a chance to index, Dok’s Dippy Duck, which, I’m given to understand, ran in the Times circa 1917. It seems awfully likely that his kids appropriated the character and renamed him Waddles for the long-running series that ran in the Christian Science Monitor. You’ll find more on that great strip at this post and subsequent ones.

Though Hager is bio’ed in several places, no one mentions Voddyvills, perhaps Hager’s only Sunday feature. It’s known to have run in 1911, but perhaps longer, and amazingly enough, was actually syndicated. My only examples come from that font of obscurities, the Bellingham (WA) American Reveille. Oh, how I wish there was better microfilm of that newspaper (it’s an incomplete mess). It seems like every two-bit syndicate salesman who rolled into town could convince these guys to run his features, at least for a little while. Perhaps until the bill came due.

2 thoughts on “Obscurity of the Day: Voddyvills”