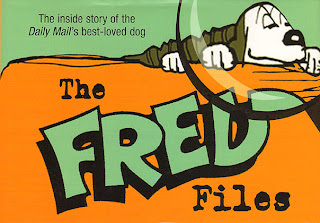 Now don’t you roll your eyes at me. No, it’s not Krazy Kat or Little Nemo, but it just so happens that Fred Basset was one of my favorite strips growing up. There was just something about the restrained humor and the deft cartooning, especially of Fred’s very expressive face, that just enchanted me.

Growing up a British subject once removed (a Canuck, that is), I found the sly and understated British humor of Fred Basset delicious. Reading it every day seemed almost like a mini-coming of age rite. If I could appreciate the gags in Fred Basset, decidely written for adult sensibilities, I was well on my way to being one. And by “adult” I most certainly do not mean that the humor was racy — it was sophisticated. Graham’s gags are never knee-slappers — he specialized in the knowing wink, the little observation and the perfect few words.

Take, for instance, a strip in which Fred and a larger dog are waiting for their masters outside of a shop. The day is windy and rainy and both dogs look miserable. In panel one, Fred bemoans his lot, “Inhuman I call it … leaving us out here in this perishing east wind.” In the second panel, Fred has moved over to the lee side of the larger dog, “Still, might be worse, I suppose.” Elegantly constructed, seemingly effortless. In the hands of a lesser talent that simple gag probably would have either used too many words or too few. Graham could have done the gag pantomime, but that would have left us without that ever-so-British dialogue that is the icing on the cake. Heady stuff — the whole British psyche rolled up into two panels. You can almost hear Eric Idle singing the unofficial British anthem “Always Look on the Bright Side of Life” in the background.

Perhaps I go too far. It’s like that with the treasures of our childhood. We can glorify them for what they meant to us, but that doesn’t make them objectively great. If you didn’t have the opportunity to read Fred Basset in your impressionable years the art may well look crude, the gags basic and sterile. Tough luck for you. But give it a try with this little book and see if you can capture a little of the magic.

The Fred Files is a quick read, and the promise of the ‘inside story’ is a bit thin on the delivery. We get a four page reminiscence by daughter Arran Graham, a very short interview with Alex that ran in a 1976 issue of Cartoon Profiles, and a small gallery of photos, special art and ephemera. The bulk of the book is a reprint of the first Fred Basset annual, originally issued in 1963. The strip reproduction is awful. It looks almost like they photocopied a badly printed copy of the original book. Surely either the family or the syndicate could have provided proof sheets? If not, then a little basic restoration would have tidied things up considerably.

The sub-par reproduction aside, the early Fred Basset strips show Graham at his best and freshest. I was glad to see that we get the original British versions of the strips — I really hate the Americanized version shorn of references to kippers, cricket and cottage pie, and where wonderful Britishisms like “cor” and “blimey” are edited out in favor of bland American terms that are at odds with the atmosphere of the strip.

I lost interest in Fred Basset in 1991 when I learned that Alex Graham had died. Although the Graham name dutifully lived on in the credits, a tiny “MBM” began appearing on the strips, whispering the presence of new creator Michael Martin who produces the strip still. Nothing against Martin, who does a creditable job, but some bit of Graham magic has been lost. For me it’s just another dog strip now. This book provided a delightful trip down memory lane to the glory days of the strip.