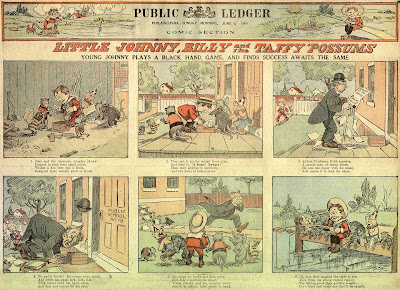 The humor magazine Judge made several attempts to syndicate reprints of their material to newspapers. This strip is from the rarest iteration of that unsuccessful plan, a 1909 effort that provided (apparently) two pages of material each week.

Little Johnny and the Taffy Possums was the headliner for the two pages, and is actually a second go-round for Little Johnny. In 1907 the Judge Syndicate began distributed the original version of the strip, then titled Little Johnny and the Teddy Bears, to a small number of newspapers. The series lasted about a year and a half, and was, as far as I know, their only offering in that period. After the end of that series, though, Judge tried to syndicate the aforementioned two page section with four strips.

In the Philadelphia Public Ledger, the only paper known to have run the 1909 Judge material, the section debuted on May 2 1909. John R. Bray, the artist on the previous Little Johnny series, continued with this new one. Unlike the previous series where the tooth-grindingly bad poetry was credited, this series allowed the writer to be blissfully anonymous. I’m told that the entire offering, including Bray’s strip, are reprints from Judge. No new material seems to have been produced for the newspaper syndication.

The Public Ledger ran the two pages of material until August 1, and then the Judge offering (or what the Ledger was willing to run of it) was cut back to a single page. Little Johnny didn’t make the cut and ended on that date.

A courtly tip of the hat to Cole Johnson who discovered this very rare material. When I indexed the Ledger in my haste I completely missed this short-lived experiment. Cole has not only provided me with an index of the material but has offered scans of each strip for our edification. We’ll continue with the three additional strips the rest of this week.

If anyone knows of any other paper that used the 1909 Judge material please let me know about it. Cole and I aren’t convinced that the Public Ledger printed the entire run of the syndicate, so we’d be thrilled to be able to cross-reference with other papers.

2 thoughts on “Obscurity of the Day: Little Johnny and the Taffy Possums”