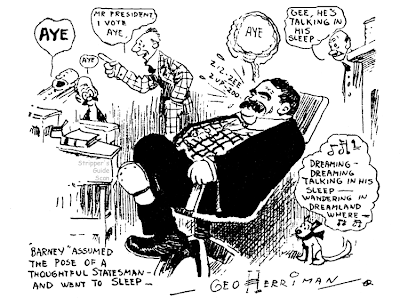 Friday, July 19 1907 — These two small cartoons were included with a story about city councilman Barney Healy. Seems that Barney has been shepherding some legislation to guarantee poll workers a wage of $5 per day. Apparently in Healy’s ward practically everyone of voting age is designated a poll worker, and Healy wants the city to pay them bribes on his behalf. Only problem is that when his pet legislation was put up to the vote at the last meeting, poor Barney was all tuckered out and fast asleep in his chair. Without his oratory to sway his fellow council members the matter was voted down.

Now Barney is angered at the council for not giving him a nudge when it was time to vote, and of course his constituents aren’t too happy since he’s been promising them this $5 boon for months. Barney has taken pen in hand to the mayor, expressing his outrage at the behavior of the council and asking him nicely to force the measure to be re-introduced. 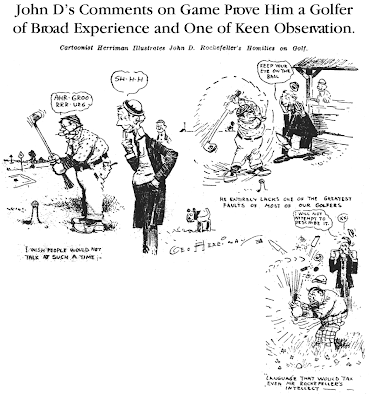 Friday, July 19 1907 — Herriman pokes a little fun at oil magnate John D. Rockefeller for sharing with a reporter some of his golfing wisdom. To wit, (1) keep your eye on the ball, (2) don’t speak when others are taking their strokes, and (3) refrain from using coarse language on the links. It’s not hard to understand why John D. rarely talked to the press when they have no mercy over some offhand remarks about golf.

Sorry about the quality of this image. It was in awful condition and I have a full plate of other activities today that keep me from giving it the usual restoration work.