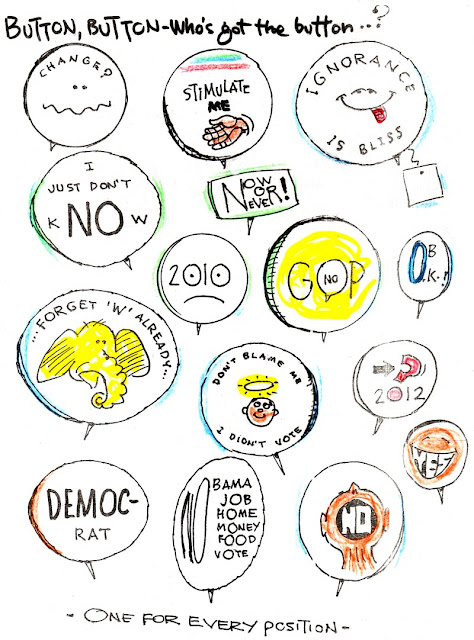 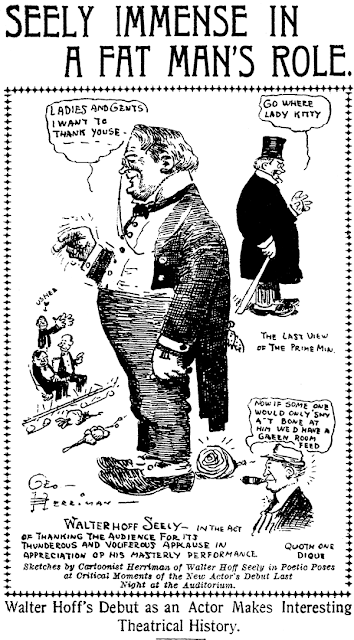 Tuesday, November 19 1907 —  Piecing together a gossamer thin bio of Walter Hoff Seely from Google results, it seems that he was a newspaperman of some minor note with the New York World in the early oughts, then on a trip to the west in 1905 he was offered, and accepted, a job in the insurance industry in San Francisco. He also became the manager of a theatre while in the west, though presumably not the one in which he acted here since that one would have been in San Francisco. In the 1920s Seely was the editor of Success magazine.

Why the Examiner decided to make sport of Walter Hoff Seely’s theatrical debut I don’t know, but they had so much fun taking him to task that the accompanying article never gets around to naming the play. 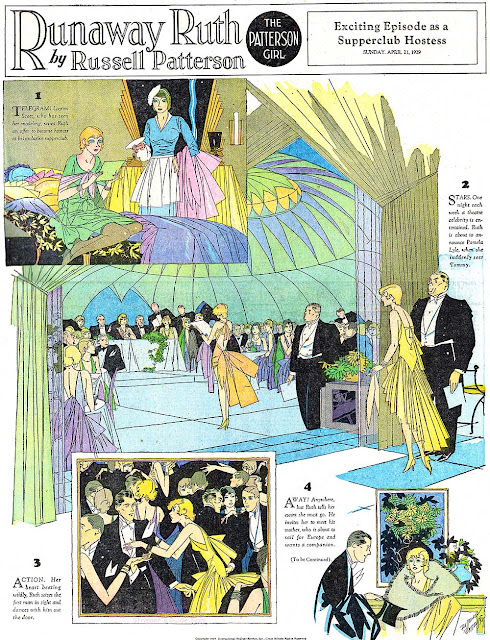 Probably the first of the Russell Patterson magazine cover series, Runaway Ruth started sometime in or before March and ran until June 23 of 1929. It was distributed by Hearst’s International Feature Service. 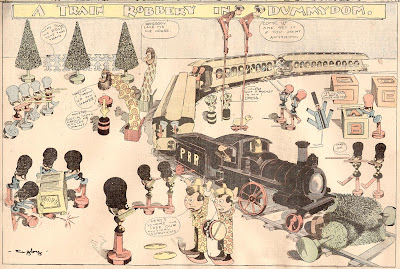 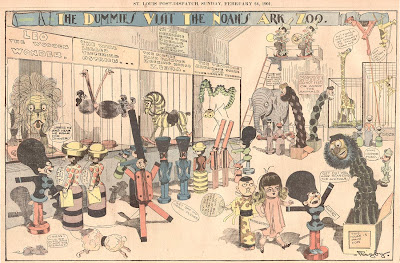 Clarence Rigby was one of those guys who seemed to work everywhere, and often had signed work appearing with multiple syndicates at the same time. Dummydom was one of his earliest continuing series; it was produced for the New York World, but at the same time he also had work appearing in the New York Herald. This is amazing to me. If he’d been moonlighting at McClure or some venue out of town, sure, but two competing New York papers. Wow! Rigby’s Sunday funnies capabilities were certainly already in full flower, though he hadn’t quite figured out that you draw the speech balloon after you’ve done the lettering, so perhaps he was really enough of a hot commodity that he could brazenly sign his work in both papers.

Dummydom‘s main characters are those wooden puppets with strings that make their limbs move. I know there must be a term for these — not marionettes I suppose because these aren’t nearly that complex and they have a base to keep them vertical. Anyhow, Rigby got some good mileage out of these and other types of toys making guest appearances. Sort of Toy Story for the turn-of-the-century crowd. 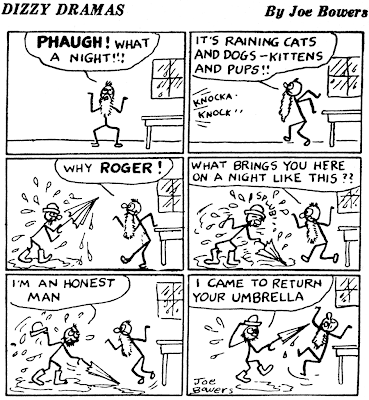 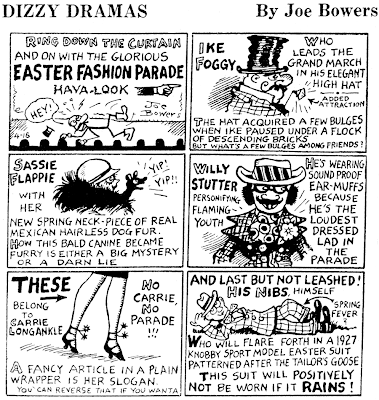 Dizzy Dramas was the comic strip equivalent of a utility man in baseball.While the examples above are printed in the manner in which its home paper used it, in syndication it’s usually seen as a page-wide single tier of panels. This format, used by only a few features, was ideal for plugging holes at the bottom of a page. In syndication Dizzy Dramas is usually seen tacked onto the bottom of Sunday color comics pages in lieu of a generic footer panel.

The strip normally used stick figures for characters and large lettering (our second example above is an unusual entry with detailed art)  so it could be easily read where it typically lurked down at the bottom of the page. The gags were simple and didn’t use continuing characters. Although the feature was a daily, few papers ran it more than once a week. However, some papers would run a whole weeks worth on Sundays by pasting a strip on the bottom of each page of the Sunday comics section.

Dizzy Dramas was distributed by the Ledger Syndicate of Philadelphia, and they initially ran it in their tabloid paper, the Philadelphia Sun. The feature started there on February 7 1927, though a contemporary article in Editor & Publisher cites a start date sometime in January. Eventually the long-running strip was moved over to the Philadelphia Evening Bulletin, where it ended on May 2 1942. Although this was probably the end of new material, the strip was sold in reprints for many years. I’ve seen it appearing as late as 1957.

The strip was credited to Joe Bowers, but Cole Johnson says that F. O. Alexander told him it “was a pseudonym for a fellow with an Italian name, which I’ve conveniently forgotten now.”

Here’s a short-lived series that appeared in the top-of-the-line version of the McClure Sunday comics section (the one with Billy Bounce, Simon Simple, etc.).The Baby ran from December 25 1904 to March 5 1905. The feature was never signed, and I tend towards it being by a cartoonist not in the usual McClure creator corral, while Cole Johnson suggests it might be Mark Fenderson’s work. The ugly mug on that baby does put me in mind of Fenderson, so Cole may well be right (as usual).

Thanks to Cole for the scan! 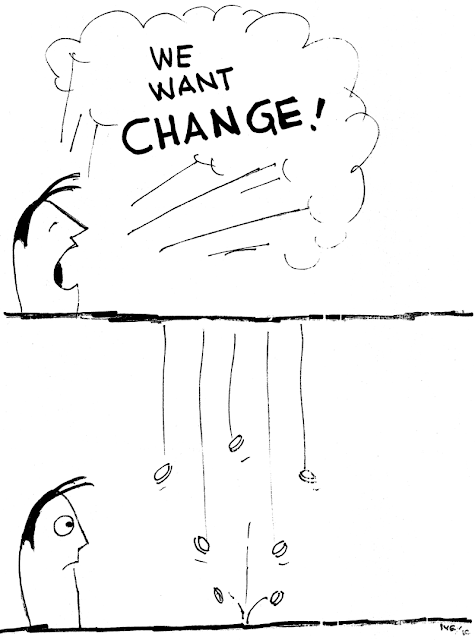 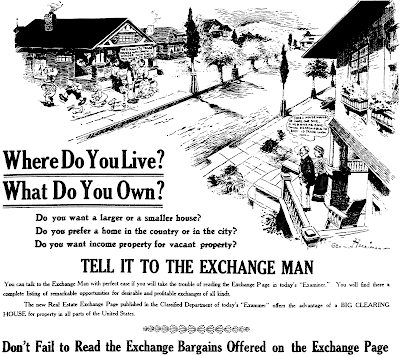 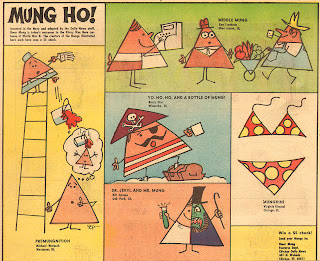 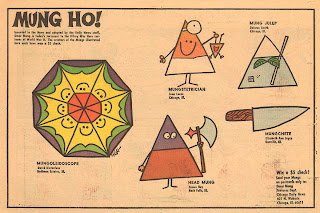 How do you take a drawing of a triangle, add a few appendages, give it an odd name and turn it into overnight national sensation? I dunno, but you apparently DON’T call it a Mung and invite readers to submit ideas for objects and people in which the term “Mung” has been inserted — Mungnetism (magnetism), Mungsignor (monsignor), Weathermung (weatherman), Three Mungateers (three Musketeers), etc.

This was the idea behind Mung Ho!, a daily and Sunday panel feature whose idea was supposedly based on a Kilroy imitator originated in the Navy. The newspaper feature originated at the Chicago Daily News and was syndicated to a few papers that probably should have known better. The feature was either credited to an imaginary Omar Mung, or the triangle character was named Omar Mung; I’m not entirely clear which. Maybe both? I notice on the Sundays there does appear to be a signature of some kind — looks like “YEP” or something?

The feature began sometime in 1969 (earliest I’ve found are from October) and the Sunday seems to have been dropped in January 1970 while the daily panel continued as late as March 21.

A web search finds a cartoonist named Dustin based out of Chicago who uses the name Omar Mung for his cartooning, photography and general weirdness blog. Is there any relation? I don’t know but given the very strange content of the blog I take a pass on finding out.

P.L. Crosby Reprints Essay in Sun
by Robert U. Brown (E&P 7/17/37)
Listed last week by the Joint Congressional Tax Evasion Committee as using legal devices to evade taxes, Percy Crosby, creator of “Skippy” for King Features Syndicate, on Tuesday, July 13, bought two full pages in the New York Sun and reprinted his “Essay on Roosevelt’s Second Inaugural Address” which he had published Feb. 15. Ten thousand copies were distributed then. At the top of the essay he reprinted part of his letter to Senator Wheeler written March 11 praising him for his Supreme Court stand which read: “In writing this letter, please know that it is from a citizen proud of his vote, proud of his nation, and from a citizen who is a creator and shall never be anything but that. It is from a citizen who believes that freedom for the individual is the most sacred heritage. It is from a citizen who is willing to pay any amount of taxes under the Constitutional form of government, and that willingly, but it is from a citizen who shall never pay toll to a one-man rule government at any price.”
Mr. Crosby paid $3,200 for the space in the Sun which was placed through J.P. Muller & Co., advertising agency, where he was described as “one of the few 100 per cent Americans left.”
Used Paid Space Before
In answer to a query from Editor & Publisher, Mr. Crosby said the Sun was the only daily paper used, and: “I have consistently used such methods since 1930 to attack conditions and fought prohibition, gangdom and pacifism in like manner. I spent over $59,000 publishing books, pamphlets and page ads. The purpose of the essay is to awaken the people, as I was well acquainted with the subject after writing a 220,000 word book called “Three Cheers for the Red, Red and Red.” Five months after publication my essay stands as truth and warning without change of a word.”
In a recent promotion piece on Percy Crosby, distributed by King, the cartoonist was portrayed as a “literary and political storm center.” One paragraph described his farm at MacLain, Va., and added, “Yet one who expected to find Percy Crosby in complete harmony with his surroundings would be foredoomed to disappointment. Skippy raises a little Cain wherever he goes; so does Crosby. He wouldn’t be happy if he didn’t.”
Crosby worked formerly for McClure Newspaper Syndicate. He sold his first drawing to Life, when he was 17 for $6. Later he worked on the New York Call, Globe, World and Sunday World, Herald, Evening Telegram and the Philadelphia Ledger. He started Skippy in 1925.