Here are some articles from Editor & Publisher about mystery features. Can anyone help find them?

This feature was advertised several times in 1971:

(10/15/60)
A Christmas comic strip designed to run either three or four weeks (the first week is optional), starting Nov. 28, is offered by the New York Herald Tribune Syndicate. It is called “The Plot Against Santa Claus” and it is drawn by Arnold Roth, the “Poor Arnold’s Almanac” man. The strip is funny and yet it bears a wise and heart-warming message.

Comic Strip Creator Has Troubles, Too

(excerpt of article, 11/19/60)
Classic is the case of a strip about Hollywood, which was widely sold about 20 years ago. It showed, one day, Dick Powell and Ruby Keeler on a beach. Ogling a group of bathing girls, Dick was exclaiming: “Oh, look at the DAMES!” The next day Warner Brothers announced a musical starring Dick and Ruby, called “Dames.” The strip was dropped by almost all papers within a week and never recovered.

[article was about the tightrope cartoonists must walk to keep from offending editors — so which strip are they referring to here?]

Here’s a strip from Harold MacGill, one of several he did for Hearst’s Evening Journal to supplement his bread and butter feature, The Hall-Room Boys. The title Oh, Piffle! bears little relation to the gag, which was about the change in a man’s behavior around pretty girls. MacGill usually worked in the larger two-tier format, so one redeeming value of this one-tier strip is that he didn’t have as much opportunity to overload the strip with a novel’s worth of dialogue; a vice he exercised with gusto in most of his work. The strip ran sporadically from May 29 to December 3 1908. 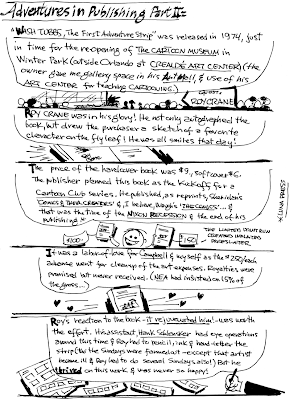 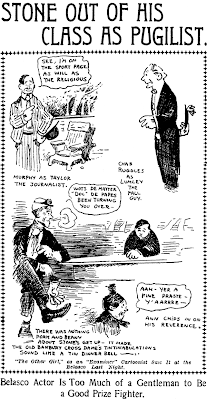 Tuesday, November 5 1907 — Reviewer William Hamilton Cline gives a mixed review to a production of “The Local Girl.” Lewis Stone is too nice to go over as a boxer, Dick Vivian is miscast, and a female lead (name not on the surviving portion of the article) is badly dressed. On the other hand, John Daly Murphy is excellent as a reporter (a role he once had in real life) and Charlie Ruggles is “very clever” as Lumley. 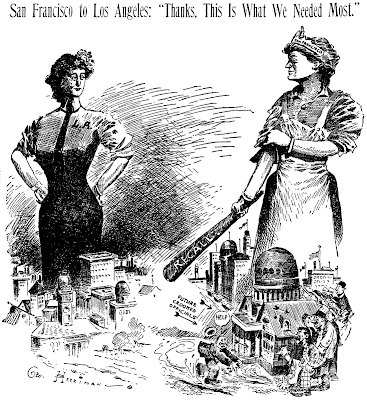 Tuesday, November 5 1907 — Herriman may have been a great cartoonist, but a delineator of beautiful women he most certainly was not. Rest easy Gibson and Flagg, your places are secure. I’ve heard of bee-stung lips, but bee-stung eyelids?

Today is election day in San Francisco, and the Examiner is urging the voters there to choose a slate of reformers, which they did, and apparently to vote for an amendment to the city’s charter allowing the recall of corrupt politicians, regarding which I can’t find any mention of in online papers.

Do you remember back in the ’70s when fads seemed to come fast and furious out of nowhere and disappear just as quickly? Here’s one I remember well — the fad of oddball antique inventions. Seemed like every paper, magazine and TV show was crowing about crazy inventions like chicken-powered butter warmers and shaving cream for babies. I particularly recall a game show where a panel of celebrities (B-list luminaries like Charles Nelson Reilly) were presented with some antique doodad. Each member of the panel would come up with a story about the item’s intended use and the contestants had to guess who was telling the truth. Watched it religiously but don’t recall the name.

Anyhow, here’s one product of that short-lived fad. Funny Fizzles was a Sunday-only panel distributed by NEA. For some reason it was not in the NEA archives at Ohio State University, so I only learned about it recently when I stumbled upon a run in the Miami Herald. The running dates there were May 9 1976 to July 31 1977. The creators were James Molica, writer, and William Nellor, art. Neither has any other newspaper feature credits that I know of.

As I was preparing this post I discovered there was a reprint book of the feature issued in 1978. I ordered a copy and maybe it will reveal a little more about the creators. 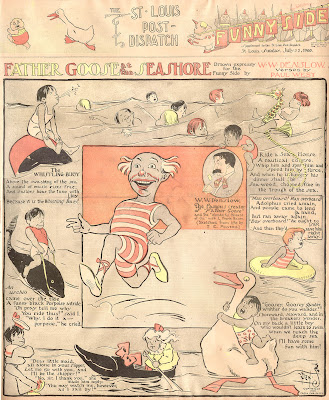 This post is equal parts obscurity and mea culpa.

In 1899 L. Frank Baum’s and W.W. Denslow’s Father Goose – His Book was published and sold like the proverbial hotcakes. As the Christmas season of 1899 approached, which promised to be a bonanza of sales for the already-popular work, the New York World published either one or two comic section pages based on the book — an early example of cross-marketing. But things get a little murky here. Ken Barker’s New York World index lists only one 1899 page, on 11/19/1899, and says the writing was credited to Baum but that he couldn’t identify the artist. I also have an earlier page listed in the Stripper’s Guide index, dated 11/12/1899, and I credit both pages to Denslow as the artist. I think I got this info from Cole Johnson but my source notes are mute on the point.

Then in 1900 there were two more pages, one on January 21 and a second on July 22 (pictured). Barker’s index gives no writing credit for these pages, but I misinterpreted his listing and credited the pages to Baum in the Guide listing. Then the above sample showed up from Cole Johnson and we see that Paul West did the writing at least on the second and final page. I received this sample early enough to fix the Guide listing for publication, but didn’t notice the credit at that time. So the published Guide will have the information for this unusual feature wrong in several different ways, and there are still unanswered question about just exactly how many installments really ran, three or four, and who the credited writers were on each one.

Given the popular interest in Baum I feel really bad about the mistakes in the index, so herewith my public apology. Now … can anyone unravel this mystery and supply the definitive running dates and credits? 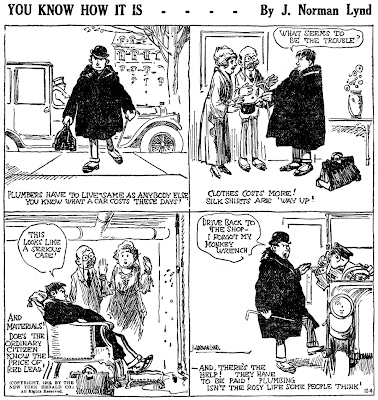 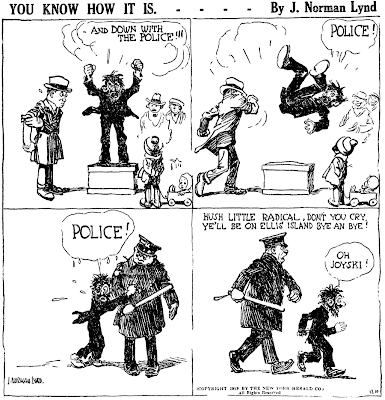 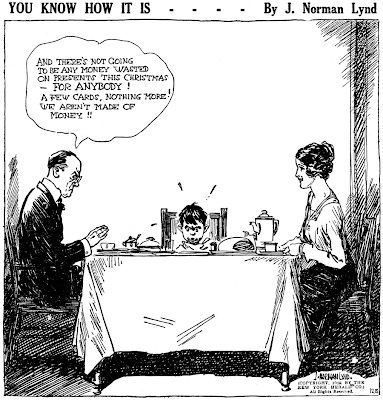 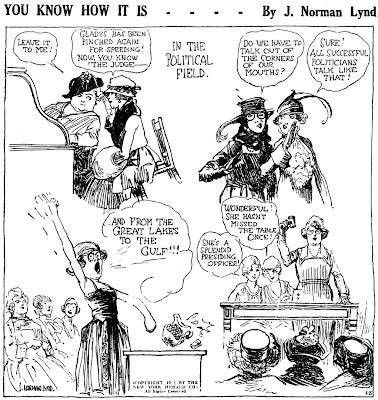 Generally I can’t fulfill curtain call requests for features because there’s typically a lag of weeks or months from when I make scans to when they actually appear on the blog. By the time you folks request more of a favorite feature the material has all been filed away and it’s a major production to dig it back out. Not so with this one, though; I had four more samples sitting on my desk when the post was published. And since I’m just crazy about J. Norman Lynd myself, happy to oblige with four more. That’s all I’ve got though — the well’s dry.

Thanks again to Mark Johnson for these samples.

Nine Strips and Panels Will Be Sent to Evening Papers, March 17 — Morning Service and Sunday Section to Come Later

The comic strip and cartoons service, for which Associated Press Feature Service has been laying plans for several weeks, will be sent to evening newspaper members, March 17, it was announced this week by J.M. Kendrick, executive assistant to the general manager. There will be nine units in the service including a daily news cartoon, an adventure strip, a pretty girl strip and several panels.

Plans for a morning paper service will soon be developed, according to Mr. Kendrick, and a four-page Sunday comic section will be made up from the cartoons judged to be the best of the list.

The nine features of the new service will be: “Gloria,” a daily pretty girl strip with continuity, by Julian Ollendorf; “Homer Hoopee,” a daily family strip by Fred Locher, former creator of “Cicero Sapp” for the New York Evening World; “Colonel Gilfeather.” a daily three-column panel, by Dick Dorgan, brother of the famous Tad; “Scorchy Smith,” a boy aviation-adventure strip by John Terry; “Rollo Rollingstone,” a daily strip by Bruce Barr; “Modest Maidens,” a two-column pretty girl panel by Don Flowers; a news cartoon by Lance Nolly, formerly of the Austin (Tex.) American and the Dallas News; and two daily panels which will not carry fixed titles. These will be a three-column village life feature by Oscar Hitt, and a two-column cartoon by Aleyn Burtis.

Ollendorf and Terry have both been engaged in creating animated cartoons for the movies, the former doing “Topics of the Day” and “Sketchographs,” and the latter working on sound cartoons.

[Don’t hold your breath for those Sundays, AP members — that ‘later’ will end up being over a decade — Allan] 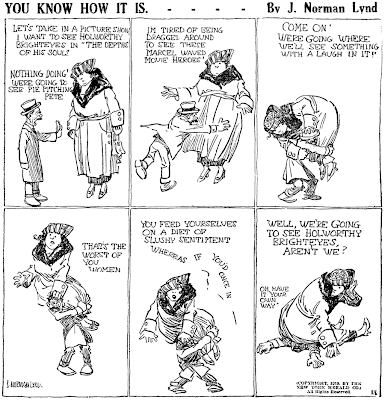 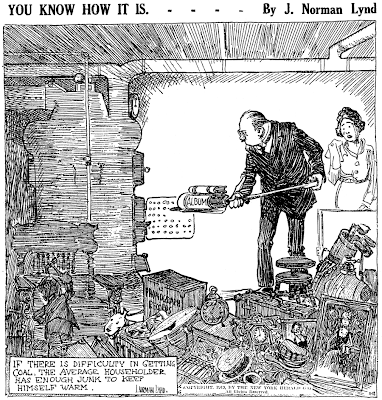 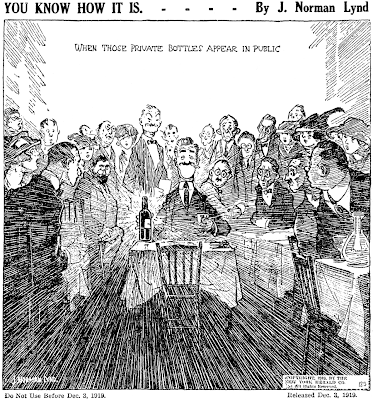 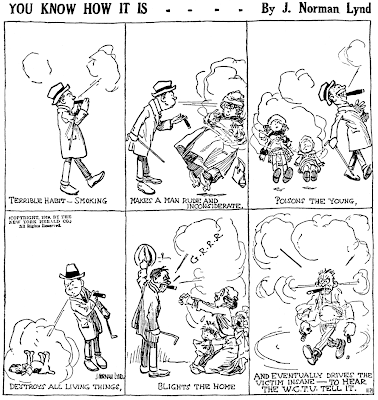 The great J. Norman Lynd is on my short-list for “Most Underappreciated Cartoonist of All Time”. Just look at the wonderful expressions, the body language, the design on these cartoons … oh, and they’re pretty darn funny, too! Lynd is best known for his incredible work on Vignettes of Life/Family Portraits series, but those were done in his comparative dotage. His earlier stuff shows even more vigor, and fully the level of technical mastery he later achieved in wide syndication.

In 1919 when this series began Lynd had already been working at the New York Herald for years as their jack of all trades — he did sports cartoons, politicals, news illustrations, you name it. You Know How It Is seems to have been produced in between other assignments and appears to have been issued at the rate of maybe two or three per week. I haven’t indexed his work in the Herald directly (the paper rarely ran anything much in their weekday papers), but there seems to have been a minor push in 1919 to sell syndicated daily-style features. This was not something the Herald was known for, though their evening paper, the Telegram, had done well with weekday syndication earlier in the teens.

The longest run of You Know How It Is that I’ve found was in the Santa Fe New Mexican, where the feature appeared semi-regularly from October 17 1919 to January 26 1920. Appearances in other papers generally started a week or so later than that start date, and petered out in December. Just another example of why the indexing work is never done…

Thanks to Mark Johnson who sent in the samples of this delightful, and unfortunately short-lived, feature. 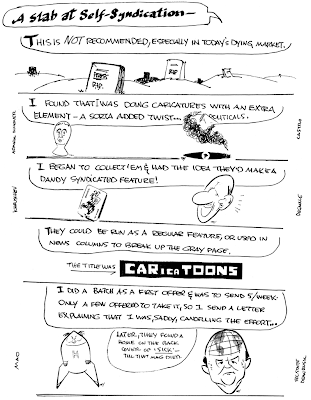