My, but I was a busy ol’ scanning fool. Here is another New York Evening Graphic strip that was lurking about on my hard drive. The Kids In Our Block by Louis Ferstadt ran in 1926-27. Ferstadt was later a WPA muralist, and then in the 40s illustrated various features for comic books, mainly for Timely and Fox. This is his only known syndicated comic strip. I’d call the art style on this strip a blatant rip-off of Wally Bishop’s Muggs And Skeeter, only it pre-dates it by two years!

Oops, I had one more strip from the New York Evening Graphic in the batch I scanned. Here is Laff-O-Graphics, aka Laff’s In The Day’s News Dispatches, aka Laff-O-News. It ran 1927-1929, and was drawn by Ving Fuller. Ving (short for Irving, I assume) was quite the renaissance man, doing syndicated strips, editorial cartoons, magazine gags, even animation. In 1949 he started his own syndicate to distribute his cartoons, including his long-running strip Doc Syke, aka Litttle Doc. Would love more biographical info on this fascinating guy if anyone knows of any resources. 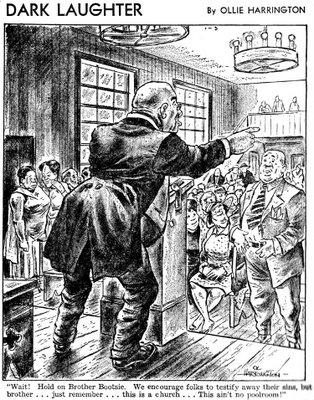 Oliver Harrington was without a doubt the most important cartoonist to emerge from the American black press. In addition to being a fine cartoonist, he was a zealous political activist and outspoken critic of the American social and political systems. His is a tremendously interesting story, and I recommend you look for these books to learn more about him:

Dark Laughter: The Satiric Art of Oliver W. Harrington by M. Thomas Inge
Why I Left America and Other Essays by Oliver Harrington

Both books are out of print and, last time I checked, rather expensive on the used market, but well worth the coin.

While his Dark Laughter panel (sometimes informally known by the name of the character Bootsie) is widely recognized for its trenchant observations, fewer remember his weekly comic strip Jive Gray. This strip, written and drawn in the Milton Caniff tradition, is full of adventurous derring-do and breathless prose, but with a black soldier as the hero the spectre of American racism is as much an enemy as the Nazis and the rest of the rogues gallery.

The strip is notoriously hard to follow because few papers printed it on a consistent basis (or even in proper order for that matter). Much like the blind men and the elephant, each historian who has taken a crack at researching Jive Gray comes away with a different history depending on the newspaper they use as their source.

In trying to pin down the basics on Jive Gray I have indexed its run in five different papers. My conclusion is that the strip began on October 18 1941, ran until April 19 1942 then went on hiatus (I believe Harrington at this point became a European war correspondent). On October 25 1942 the strip reappears, seemingly without missing a beat, and runs until June 16 1951. Now some of this run may well be reprints, a practice common in the black papers, but I believe I’ve pinned the dates down about as well as anyone is ever likely to do. The last and best step to be taken is to go through these papers making copies of the strips in an attempt to assemble a complete unbroken run of the story, a task I leave to others.

Our samples today are bothe from a 1947 issue of the Pittsburgh Courier. 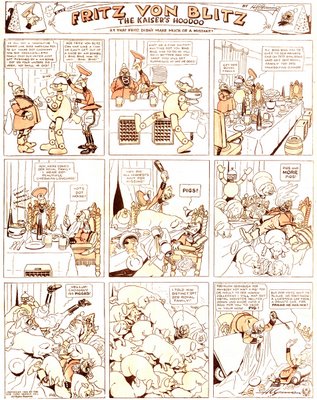 Here we have one deliciously nasty anti-German strip from World War I. H.C. Greening revived his Percy the robot characters (earlier featured in Percy – Brains He Has Nix) for the New York Tribune on August 18 1918, just beating out the end of hostilities by a few months. Undaunted by the end of the war in November, Fritz Von Blitz The Kaiser’s Hoodoo kept right on running until February 23 1919. After that Greening waved his own flag of truce and renamed the strip to Percy.

Although robot characters were not unknown in the comics of the day, Percy is one of a select few who got the star treatment in his own strip, and probably the only one to have his own long-running Sunday page.

You wouldn’t think that a comic strip could sustain itself for long on this plot. Mister Mac has remarried, and his second wife compares unfavorably with the first. That’s it.

Harold MacGill created this oddball item for distribution through Associated Newspapers, with a copyright to J.G. Lloyd. The strip began on August 16 1915 and ran daily through March 11 1916, when MacGill gave it up to start, or rather restart, Percy and Ferdie, formerly titled The Hallroom Boys in its first run. 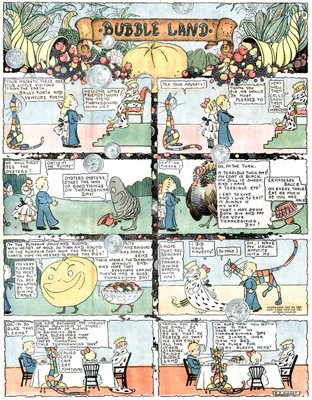 The New York Herald sometimes makes me scratch my head in wonder. They were an important New York paper, and their comics were generally classy productions. And then they’d feature something like Bubble Land on the cover (ok, sometimes back cover) of their Sunday comics section. The only thing that saves this kiddie fable from being a total loss is the vibrant color and sometimes interesting page layout, like in this example. The cartoonist, one R.D. Highet, of whom I know nothing, produced uneven work (that creature in panel five was the product of what, two seconds of drawing?), and the story is practically just random thoughts strung together in no particular order.

Bubble Land graced, or wasted, a page of the Sunday comics from November 10 1918 to April 25 1920, a very long run for a strip I bet even the little ones gave up reading early on.

Jay Maeder sent these samples of the New York Daily News’ Broadway photo-comic that he told us about a few days ago.

Let’s get the skinny from Jay:

“Can’t provide an exact startdate, but the feature launched circa late 1926/early 1927. I assume it was Hellinger’s creation. He was already a big-name colyumist by then, probably unlikely to have been assigned daily gruntwork he didn’t personally care to do.

“The stage stars, greater and lesser, were the drawing cards, of course — obviously not the gags. Nifty these years later to see some of these local showfolk, just starting out at the time, who would go on to become huge. (Or not: Note tragic young Helen Walsh, one of the Great White Way’s most famously beauteous chorines of the moment, who burned to death in a boat explosion in 1931. ) I’d bet Humphrey Bogart appeared in this strip at one point or another.

“Unknown to me who carried it on after Hellinger jumped from the Daily News to the Mirror in January 1930. But on it went,not expiring till late 1936.”

Jay provided two images from the infamously godawful Daily News microfilm. I cleaned one of them up as best I could (forgot one word balloon — oops!), the other I left in its pristine raw glory. I must admit that I am dumbfounded that I’ve never seen this strip before – running in the Daily News I should have seen a sample somewhere. Heck, it was even syndicated. From E&P I can contribute that it was credited to Sidney Skolsky in 1930 and 1933, and Jack Chapman in 1932. It was advertised uncredited in 1935-36.

Here’s the last of the Graphic Syndicate strips that I scanned. This one, called May and Junie (aka May and June), features the usual pretty girls. The story here are the creators. The originator was Harold MacGill, a very important guy in the history of comics, as you well know if you are a Hogan’s Alley reader. This was MacGill’s last known strip, and he didn’t keep at it long. The strip began sometime in 1926, and he was gone by mid-1927, if not earlier. Taking over was someone who signed the strip ‘Pat’, when they signed it at all. Pat is the cartoonist on our sample today. Pat wasn’t much of a cartoonist, but s/he kept it going for about another year. The final cartoonist to draw the gals was Gladys (Mopsy) Parker in her first known syndicate credit. She didn’t last long, perhaps little more than a month or two, before the strip ended on March 3 1928.

Since I’m running through the Graphic Syndicate’s output, here’s Mack and Marx. Amazingly, a Graphic strip that did not feature pretty girls (unless your taste runs to the Rubenesque). Sadly, the sample I was able to lay my hands on barely includes the stars of the strip. Sorry ’bout that.

The strip was credited to Sam Hitt, who I assume is actually Oscar Hitt. It ran 1927-28, no specific dates known because the Graphic only survives in a fragmentary microfilm record.

Another New York Evening Graphic strip today. Miraculously, the stars aren’t pretty girls, though they managed to shoehorn them in anyway. J. Carver Pusey drew The Chance Brothers for about a year or so for the Graphic, starting sometime in 1927. Pusey started the classic strip Benny after escaping from the Graphic offices.