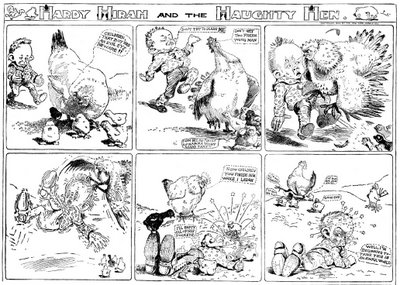 Here’s a cute Sunday strip from 1902. Hardy Hiram ran from 3/2 to 4/13/1902 in the New York Tribune. At first glance you’d think that the cartoonist failed to sign the strip, but if you look at the chicken on the right in the last panel you’ll see that its tailfeathers spell out V E T. So the question is, who is VET? Anyone know?

Jeffrey Lindenblatt called me yesterday to discuss a head-scratcher he’d encountered in his research. He was finding new information on Jack Wilhelm’s That Certain Party strip that indicated it ran much longer than previously supposed. That brought up the question of how Wilhelm could have been handling two daily strips at the same time; the aforementioned strip and Frank Merriwell’s Schooldays. Well, to make a long story short, we did a little bit of E&P research on the phone, and then I delved into my files, and I’ve ended up rethinking the history of the Frank Merriwell strip. Or rather, strips, plural.

The few comic strip histories that mention Merriwell state that it began in 1931. Well, I know better because I have a run that starts in 1928, and I have a contemporary E&P article that tells me that the strip began on 3/26/1928. Case closed? I thought so. Well, case reopened. I’ll spare you the sleuthing involved, and just get to the results – there were two separate strips. The first, titled Young Frank Merriwell, seems to have run 3/26/1928 – 9/28/1928. It was syndicated by McClure and featured art by a very rushed and/or disinterested John Hix. The second run, usually titled Frank Merriwell’s Schooldays, started 7/20/1931 and ended 7/14/1934 (to be replaced by Chip Collins Adventures, discussed at length in this blog entry). It was drawn by Jack Wilhelm from start to end and syndicated by Central Press Association.

As long as I had all my Merriwell strips out, I scanned in the first five strips of the first series to show you. At least I think they’re the first five, but they either ran a week or so late in this paper or there were some introductory strips missing from my run (notice that the numbering starts with #1, though). Fair warning before you start reading – caution – turgid prose ahead! Oh, by the way, the reason for that incredibly moronic subtitle “The Son of His Father”, is that the hero is Frank Merriwell Junior, son of the 1890s hero of dime novel infamy. 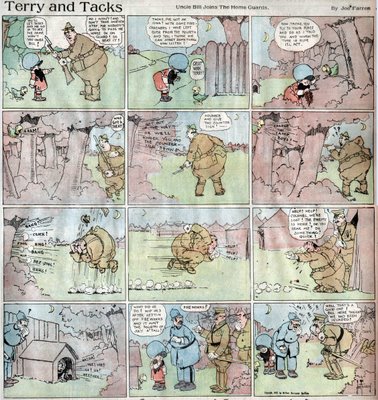 Here it is Memorial Day, so let’s find an obscurity with an armed forces angle. Easy to do, too, if you look at wartime comic strips. Many features wholeheartedly embraced war themes in World War I and II, far fewer in later wars. Later wars, of course, did not have the benefit of having public opinion so solidly in their favor, so few cartoonists felt it in their best interest to dwell on them.

Here we have Terry And Tacks, which takes an unusual spin on the perenially popular ‘a boy and his dog’ theme. Young master Terry’s constant companion is a parrot, a pet with the distinct advantage of being able to talk. This becomes the springboard for most of the gags in the strip, as Terry employs his feathered friend to pull off all sorts of Katzenjammer-style stunts, aided by the prodigious vocal capabilities of Tacks.

Terry And Tacks ran from 2/13/1916 to 7/7/1918 in the McClure Syndicate’s preprint Sunday comic section. The strip was by Joe Farren, a journeyman cartoonist with a distinct lively style. The strip was later reprinted in the World Color Printing preprint sections in 1925 and then again in 1930.

A note to any servicemen and women reading this. Thank you for your service, and always remember that no matter what goes on politically regarding the sometimes ill-conceived military actions waged by the USA that the citizens of your country love, respect and admire each and every one of you for heeding the call to duty. 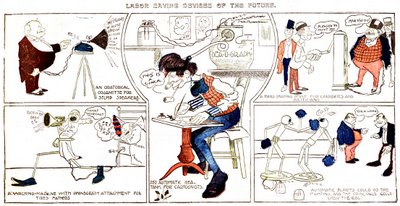 I mentioned Dink Shannon the other day in connection with his work on the resurrected Constable Hayrick feature. Today we have a rare self-portrait of our man Dink at work in 1901. The feature is a one-shot display of single-panel gags and it ran in the World Color Printing Sunday section. As far as I know, Shannon did his only syndicated cartooning work for this poor-man’s Sunday section, where he started in 1901 and was one of the foundations of their success until he disappeared in early 1909.

Few comic strip fan have heard of any of Shannon’s strips, but amongst the best and longest lasting were Mooney Miggles And The Magic Cap, Sammy Small and Mister Pest, Book Agent. If you look for Shannon’s work, keep in mind that he often signed with just a four-leaf clover symbol.

The sample above has double the fun, because in addition to the delightful Dink self-portrait, the gags are all related to crazy inventions. Don’t let anyone spoof you with the claim that Rube Goldberg invented the concept! Goldberg certainly took the idea to a new level of lunacy, but lots of cartoonists were plowing the same ground well before the great man. 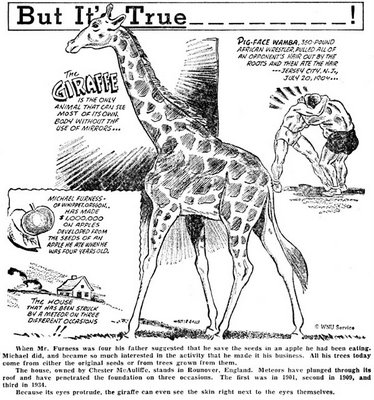 Yet another Believe It Or Not knockoff, this one was produced by Walter Galli for the Western Newspaper Union syndicate. WNU catered primarily to weekly papers with a line-up that included a combination of their own material, like Mickie The Printer’s Devil, The Featherheads and Finney of the Force, plus reprints from other syndicates.

Galli’s other verified syndication credit is Stranger Than Fiction, also a Ripley simulacrum, and it was produced from about 1934 to 36. Then Galli switched syndicates, switched titles, and kept on doing the exact same material with But It’s True. This feature is known to have run at least 1937 to 1939, but perhaps longer. Western Newspaper Union was pretty lackadaisical about advertising their wares in the E&P syndicate directory, so I can only go by the tearsheets in my collection for running dates. Do you have any earlier or later?

You’ll note that our example includes a text piece at the bottom giving further information about the illustrated items. Not many people realize that this was for a long time a typical feature of the ‘oddities’ panels. Ripley’s original included it for many years as did most of the better knock-offs. However, most newpapers seemed to consider the text portion a throwaway and few printed it. Some oddities panels, instead of further discussion of the illustrated item, just printed an address and offered to send proof of any item by return mail. Curiously, I’ve never seen any of these proof letters offered for sale. Have you? 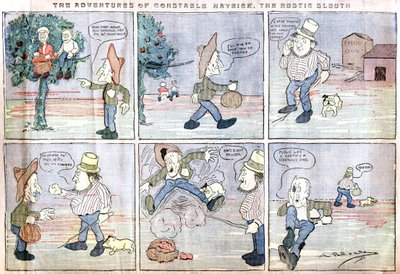 One of the earliest continuing features from my beloved World Color Printing was The Adventures of Constable Hayrick, The Rustic Sleuth. It started on 8/11/1901 in a comic section otherwise monopolized by one-shot strips and panels. As can be seen from our example, the art by one Albert Bloch (or Block, I’ve never been sure) is primitive as can be. The cartoonist (or perhaps the pressmen) didn’t even know to leave the background white on the word balloons, so not only is the art amateurish, the entire presentation leaves a great deal to be desired.

The strip is pretty standard fodder for the time. Cartoonists in these early days seemed never to tire of spoofing the rural folk. A comic section without a dumb farmer or a cornfed fish out of water in the big city just wouldn’t have seemed complete. Occasionally a cartoonist would get the bright idea of having the farm folk outsmart the city slickers, but even that turnabout was a pretty hackneyed concept by 1901. Bloch throws in the minor wrinkle of making his half-wit farmer a wannabe Sherlock Holmes, but doesn’t really do anything all that interesting with the idea. Hayrick’s sleuthing is mostly confined to outwitting farmboys stealing apples and giving hobo grifters the bum’s rush out of town.

Bloch produced the Constable Hayrick strip pretty much every week, as well as contributing a lot of additional one-shot material to the section. But Bloch left the syndicate soon and Hayrick was put on ice after the episode of 10/6/1901. However, the feature was revived in 1902 by Dink Shannon, an excellent cartoonist. His stewardship lasted just three weeks, from 9/7 to 9/21/1902. The constable made one final appearance in the section of 10/12/1902, this time signed by Bloch again. My guess is that this is either a rerun from the first series or a leftover strip that never made it into the section back in 1901.

And that’s the end of our little visit to the world of Us Boys. So what did you think?

After enjoying today’s helping of Us Boys, take another look at the blog post on Roy Rogers. Alberto Becattini has sent on a lot of information that has been added to to the post.

Like many people, I tend to ignore a comic strip if the art is unattractive. That’s a bit unfair, because in some cases those badly drawn strips were successfully syndicated based on the strength of the story or gags. So while there are plenty of strips around that make you scratch your head in wonder that any editor picked them up, some badly drawn strips are jewels in spite of their artistic shortcomings.

I admit to not ever having read any of Tom McNamara’s Us Boys until recently despite plenty of opportunities. The strip is downright painful to look at, with amateurishly drawn characters, no backgrounds, and a surfeit of text in many strips. But I was clipping a month’s worth of 1921 Columbus Dispatch strips the other day, and I was looking for a good candidate for running on the blog. So I forced myself to give Us Boys a chance.

As you can guess from its appearance here on the blog, I think I’ve stumbled upon a minor gem. First of all, I didn’t even realize that the strip had a continuity. Nor did I realize that the continuity seems to have included the Sundays , a rare thing in the early 20s (the Dispatch didn’t run the Sundays but there are obvious gaps and recaps that indicate such). The gags are thoughtful, sometimes quite inventive. And most importantly, the strip had a humanity about it that I never would have guessed from the primitive drawing style. In this sequence McNamara has a low-key way of presenting the societal ill of poverty that is powerful in its understatement. He teaches kids morality lessons in such a sly off-hand way that they won’t realize they’re being educated (naturally, kids are instinctually repelled by entertainment with a lesson ).

So give Us Boys a try and let me know what you think. The sequence, which ran in the Christmas season, will only be about three and a half weeks of strips. And if you care to share with other blog-readers and myself some of your picks for undiscovered gems, by all means please do.