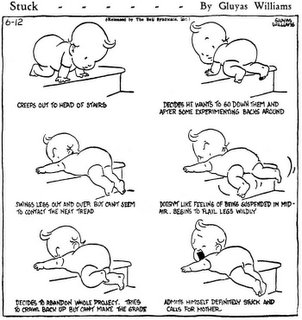 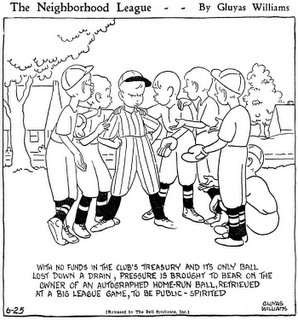 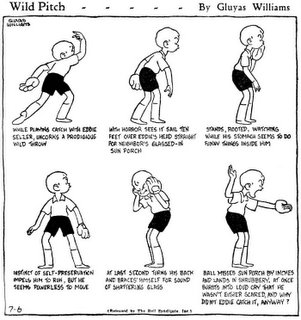 Here’s another three wonderful panels by clean-line artist extraordinaire Gluyas Williams. If this whets your appetite for more, there are a few reprint books available that, though out of print, are reasonably priced. I recommend The Best of Gluyas Williams (Dover), The Gluyas Williams Gallery (Harpers), or Fellow Citizens (Doubleday). All are readily available on ABE at reasonable prices (here’s a link to the listings). Of course, Williams’ work also appears in most of Robert Benchley’s books, and I give those my uber-highest recommendation. One of the greatest writers of the 20th century in my opinion, unfairly dismissed by the intelligentsia because he chose to concentrate on writing humor. His prose is as tight and punchy as anything by that Hemingway fellow. If you appreciate good writing and haven’t read Benchley you really are missing out on a very pleasurable experience. 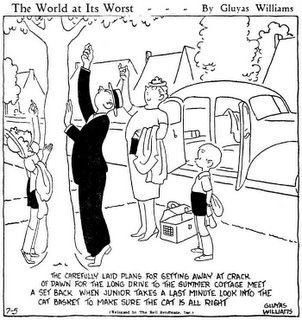 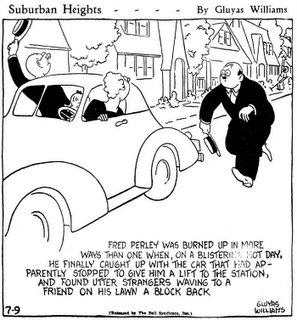 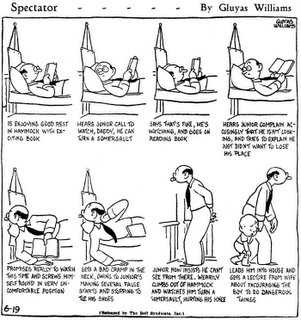 Nothing really obscure about Gluyas Williams, just thought I’d share a few of his great cartoons. In the trinity of the most popular untitled comic panels (H.T. Webster, Clare Briggs, and our man Gluyas) I’d put him as number one for cartooning ability, number two (after Webster) for humor. He certainly was a distant third in popularity in his day, owing, I imagine, more to the strength of his syndicate (Bell for most of the run) compared to the other two.

The earliest Gluyas Williams newspaper panels I’ve found are from November 1922, and the feature ended sometime in 1947. Williams was also well-known for his New Yorker cartoons and book illustrations (most notably for Robert Benchley’s works).

In perusing some Gluyas Williams source material, I find no reference to the proper pronunciation of his name. Anyone know? (perhaps “will-yums”?) 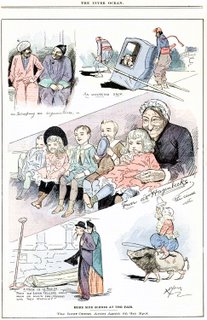 The very first color supplement produced on a high speed newspaper press was issued by the all but forgotten Chicago Inter Ocean in 1892. The first color supplement was issued to commemorate the Democratic national convention held there. The color supplement became a regular feature of the Inter Ocean, and was produced sometimes as many as three times per week during the Columbian Exposition held in that city in 1893. Most of the color material was in the form of drawings of exposition attractions, but there were also many humor and editorial cartoons printed in color. During this period the color cartoons were mostly produced by a pair at opposite ends of their careers; Thomas Nast and Art Young.

After the close of the exposition, the newspaper changed the color supplement into a children’s section, and soon the very first regularly appearing color newspaper comic characters were cavorting through its pages every week – the Ting-Lings, a group of cute Asian children. Yes, Virginia, they do indeed predate the Yellow Kid.

But I’ll save discussing the Ting-Lings for future blog entries. Today we have a wonderful Art Young cartoon from the Inter Ocean color supplement. My source material is missing the front cover of the section, but I believe this page is probably from the 11/12/1893 section, which was Art Young’s last appearance there before the section changed over to juvenile content. 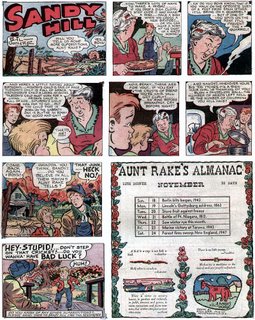 Sandy Hill, a comic strip about a country boy and his family, was the swan song for Bil Dwyer on the syndicated comics page. Dwyer was a member of the King Features bullpen in its heyday of the 1920s and 30s, assisting, retouching and occasionally ghosting Hearst strips. He got a byline starting in 1932 when he took over Dumb Dora, Chic Young’s flapper strip that he abandoned to start Blondie. After Paul Fung spent two years continuing Dumb Dora he too took his leave, and the job was handed to Bil Dwyer. Dwyer continued the strip quite capably, but it was cancelled in 1936.

What Bil did between Dumb Dora and Sandy Hill is a bit sketchy – I seem to recall reading about a stint in advertising comics, and he is also said to have ghosted Wally Bishop’s Muggs And Skeeter during the World War II years.

Sandy Hill, a Sunday and daily strip, debuted on January 8, 1951, from the Des Moines-based Register and Tribune Syndicate. The Sunday, which specialized in the sort of down-home material we see in this sample, caught on in a small way with some southern newspapers, but the daily is rarely seen.

The strip packed it in on September 26 1954, but Dwyer must have realized that this Southern-fried material had a potentially lucrative audience. After a long time out of the spotlight, in the 1970s Dwyer started a publishing company named Merry Mountaineers that specialized in pamphlet-sized publications with titles like How Tuh Live In The Kooky South and 2001 Southern Superstitions. These publications were perennial bestsellers on the racks in souvenir shops at Appalachian and Southern tourist meccas, and must have kept the wolf from the door in Dwyer’s golden years.