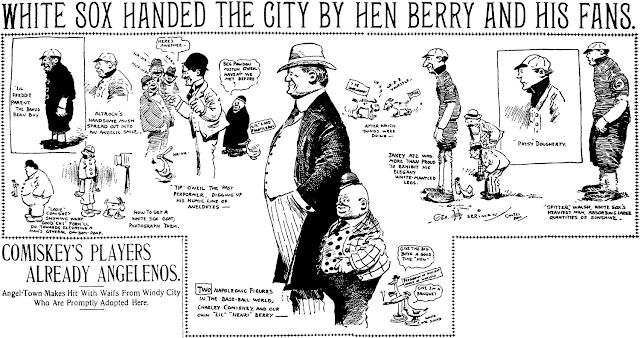 Thursday, March 5 1908 — Charles Comiskey’s White Sox arrive in Los Angeles for spring training, and the city rolls out the red carpet for them. A morning rainstorm only dampens the festivities slightly, and the Sox get a chance in the afternoon to do some very light training. Throngs of Angelenos are on hand to gawk at the mighty Major Leaguers. 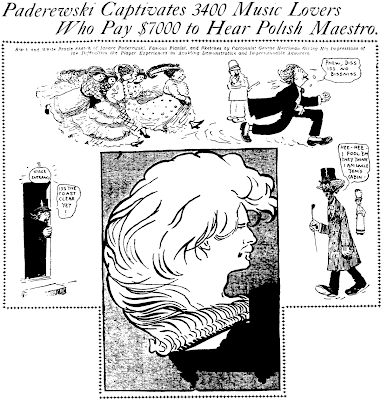 Wednesday, March 4 1908 — Pianist extraordinaire Paderewski, whose fame and fandom in this era was  comparable to that of Sinatra in the 40s or the Beatles in the 60s, plays to a packed house in L.A. last night. In his second visit to the city, Paderewski was gratified that his concert wasn’t rained on, as was the one three years before. Paderewski must have quite liked California, as he later bought a tract of land there and started a Zinfandel grape orchard, the product of which became famous.

Wednesday, March 4, 1908 — The fight last night between Jimmy Britt and Battling Nelson was, because of anti-gambling laws, technically only an exhibition. So who won? Well, there’s quite a difference of opinion, with important boxing writers siding pretty evenly between Nelson, Britt and a draw between the two. No doubt about it, though, the sixth round was an important one. Nelson gave Britt quite a beating in that round. However, Britt valiantly came back from that bad pummeling, and hindsight seems to show that the writers who sided with Britt did so more on his gameness in coming back for rounds seven to ten than purely on points.

In any case, the decision made by history is that Nelson was the winner. He continued on his career, winning the world lightweight title, while Britt immediately sank into obscurity and soon quit the sport. 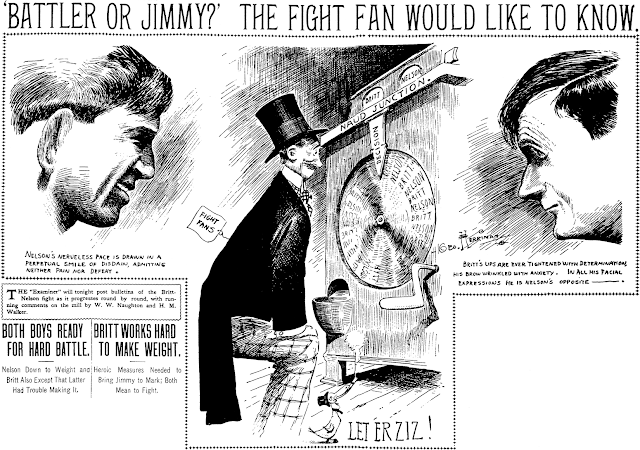 Tuesday, March 3 1908 — Oh no! Finally it’s the day of the big fight between Jimmy Britt and Battling Nelson, but the bout is held long after press time of the Examiner! Stripper’s Guide readers must wait YET ANOTHER week to learn who won! If only the bout had happened in the dim past and there were some sort of electronic resource that could be used to find out what happened…

Monday, March 2 1908 — Tomorrow is the big fight between Jimmy Britt and Battling Nelson. Which one will win and go on to a long career in the ring, and which will lose and soon put up the gloves for good? And will Herriman ever bring to a conclusion the Hen Berry weasel hat story?

Sunday, March 1 1908 — Two days left before the big fight between Battling Nelson and Jimmy Britt. The cartoon forecasts that the winner will go on to bigger and better bouts while the loser will be relegated to obscurity. And you know what? Herriman is exactly right. The winner went on to a long boxing career, while the loser got out of the sport after a few more bouts. 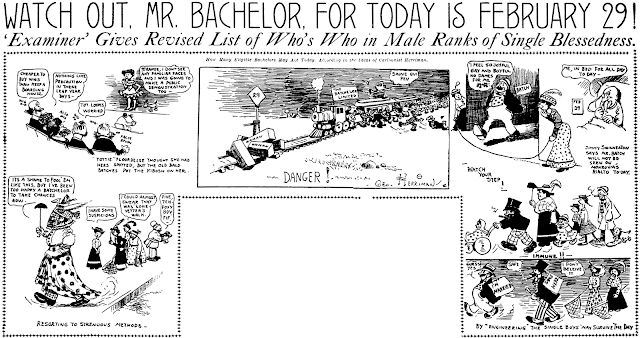 Dear Readers —
I moved our weekly Herriman post to today, since I was not about to let such a lovely example of kismet go to waste. Oddly enough, our regular Saturday post this week was to be the cartoon above, which discusses marriage and was published on February 29th, 1908. Well, 104 years later to the day, February 29, 2012, I have some marriage news of my own.

I am happy and proud to announce that today your blog host has been accepted into the bonds of matrimony with the most beautiful, intelligent, witty, charming girl in the world. Assuming, that is, she doesn’t have a last moment attack of clarity and runs for the hills.

Assuming all turns out as hoped, Mr. Stripper and his blushing bride plan to spend the next month  occupied exclusively in billing and cooing, and not paying one iota of attention to comic strips. Therefore, for the month of March the Stripper’s Guide blog is under the exclusive direction of Mr. Alex Jay, who has my deepest appreciation for taking on the task.

I trust you will treat Alex Jay as a special guest and not as a subtitute teacher. Play nice while I’m gone kids, and I’ll see you in April! 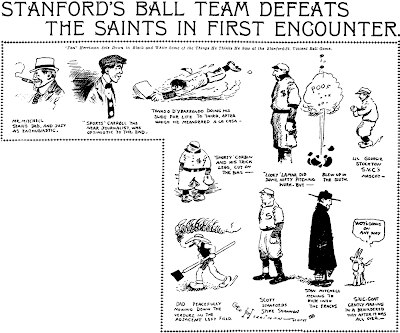 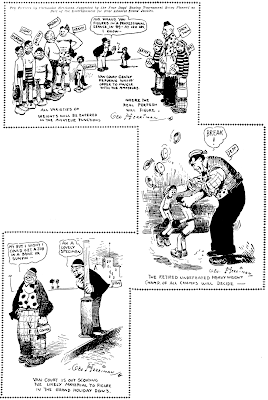 Friday, February 28 1908 — Among the many festivities planned for the arrival of the Great White Fleet (see previous Saturday episodes) is a four-day amateur boxing tournament put on for the entertainment of the gobs. An important part of the attraction is the star-gazing potential, as well-known professional boxers will act as referees and seconds, including Jim Jeffries.

Thursday, February 27 1908 — Apparently it’s pretty big news when boxer Jimmy Britt takes a long jog in the morning rather than work out in the gymnasium. Do you think a runner, even in 1908, really did their miles dressed in suit coat, hat and dress shoes?!?!?