Sorry folks, ran out of time to prep my Herriman post for today. So instead here’s a few questions we’re pondering; maybe you can help!

Our Gang Ad — Cole Johnson sends this Royal Gelatin ad, saying that it might be by Virginia Huget. I see no particular resemblance to the art style I associate with her, but it’s also well established that she was pretty good at aping other styles. Anyone want to weigh in with an opinion on whether this is Huget, or maybe you’d like to nominate some other cartoonist? 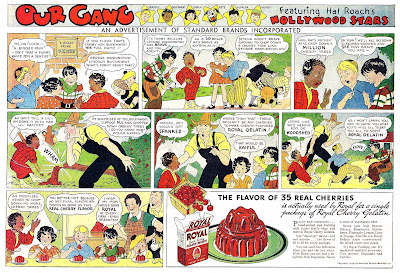 The Grizzwells — I was just clipping a few current strips the other day and noticed that The Grizzwells by Bill Schorr seems to have a second creator credited within the strip. Looks like ‘Smith’ to me, but at postage stamp size it is hard to tell. Found nothing on the web saying that the strip now has two creators. Does anyone know anything about this Smith person and his/her role?

Newspaper Archives on the Web — I know about Newspaperarchive.com, of course, and the Library of Congress has a selection of digitized newspapers, and then there’s Google Newspaper Archive as well. There’s also Newslibrary.com, which I know very little about. There’s also some localized websites like this one for Utah and one for New Jersey papers, for which I’ve somehow lost the link. If you know of other sources for digitized newspapers available on the web, either free or fee, I’d like to know about them. I think a link collection for digitized newspaper sources would be a great resource. Ideally we’d also tabulate a list of newspapers and date ranges as well, but that may be impossible to do as it is a pretty swiftly moving target.

Here is some recent correspondence from researchers. I was unable (or in the last case, too lazy) to help these folks. Can anyone provide sustenance for these hungry minds?

From Ulrich Merkl:
I’m still researching about Robert McCay, found out many interesting details, but nothing about the strip HIS JOB. I’ve only got three samples from Peter Maresca. Do you think you could post a ‘Please help’ call on your website? Anybody out there being aware of any strips, dates, newspapers, etc.? I don’t want you to do my homework, but I really don’t know how to reach only 1/10 of the strip experts you can easily reach with your blog.

(Ulrich is primarily looking for papers that ran it. It only ran for a week in the New York Journal, only place I’ve found it. And he’s found the SF Examiner running it in July 1923. But we are pretty certain it ran longer than that.)

From Tony Rose, University of Arkansas at Little Rock:

I’m trying to find out more about the cartooning career of an early 20th century illustrator, Royal Roger Eubanks (born 1879).  Our archives has just received a very large collection of letters and ephemera from a wealthy Cherokee family, one member of whom was briefly married to Eubanks.  I’m familiar with his career as a book illustrator in the 1920s but I know next to nothing about his cartooning.

He signed himself “R. Ubanx”.  At the turn of the century, 1902 or so, he was working for the Chicago Evening Journal.  He may have had a larger business role than merely cartoonist.  Family history connects him to something called the “Star Cartoonist Company.”

By 1910, following a divorce, he was back in his hometown in Oklahoma (he was a Cherokee), living with his parents.  He listed his occupation on the census as “cartoonist.”  In 1920 he illustrated a collection of Native American folk tales called “Tales of the Bark Lodges.”  He also wrote some dialect tales of his own.

He spent the later part of his life as a high school teacher in Berryville, Arkansas, dying in about 1955.

From Kenneth:
How many “Hocus Focus” cartoons are known to exist?

Charlie Roberts just sent me a batch of questions, some of which I can answer, some I can’t. So can you help on those I can’t?

Q When did the first Dagwood sandwich appear in Blondie?
A Dunno. Anyone?

Q When did Daisy first appear in Blondie?
A Dunno. Anyone?

Q I’ve read that Chic Young stopped drawing the strip for a year or so when his son passed away in 1937. Any idea of what time period that was ?
A Wasn’t Jim Raymond handling all the art chores by then? Anyone?

Q Do you have any information on Vin (or Vincent) Sullivan doing cartoons or strips in the Brooklyn Eagle or other Brooklyn newspaper in the late 20’s or early 30’s ?
A Vin Sullivan did have a few things published in the Eagle, little strips on the kiddie page. He did a strip called Jibby Jones that ran VERY sporadically from 1927-29 for that amateur page.

Q Are Fred Harman’s Bronc Peeler originals available?
A I do recall seeing a daily for sale once, so they do exist, but I imagine they’d be pretty pricey. A Sunday with the On The Range topper would, I imagine, be into 5 figures.