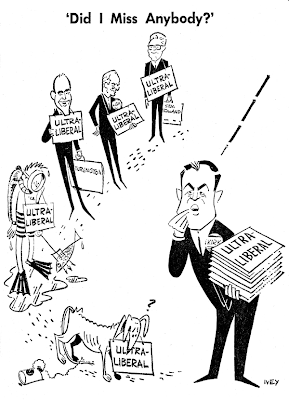 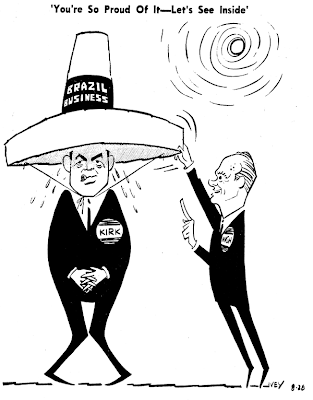 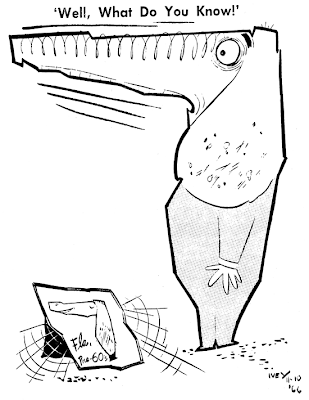 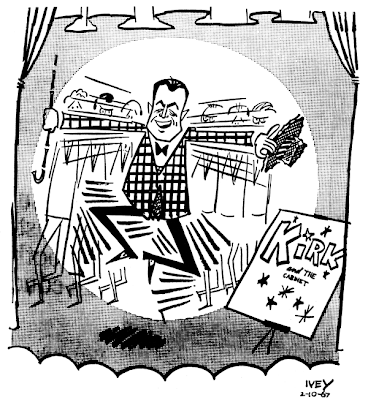 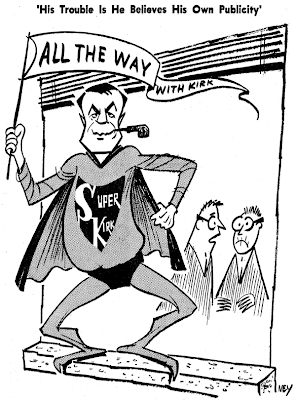 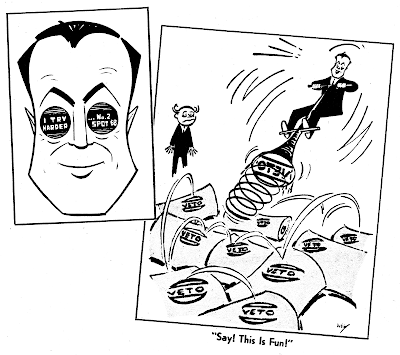 Jack Wilson alit at NEA for a short stint in 1915-16,and created a few features, including Andy the Ad Man, for them. Now if you read these samples you’ll wonder why I call the strip by that name. There is no indication that Andy is in the advertising business, and besides, the strip is clearly titled Andy the Wise Guy.

Well, all I can tell you is that the strip bore that name in the NEA archives and in quite a few papers. Maybe Andy’s advertising angle only lasted the first few strips, and the Atlanta Journal, the paper from which these samples originated, had the sense to come up with a different name. I dunno. But that’s my story and I’m sticking to it.

Andy the Ad Man ran from October 22 to December 10 1915. After that the strip was revamped, dropping the Andy character and making Harrigan the star. And that strip will be covered some other time.

Thanks to Cole Johnson for the samples! 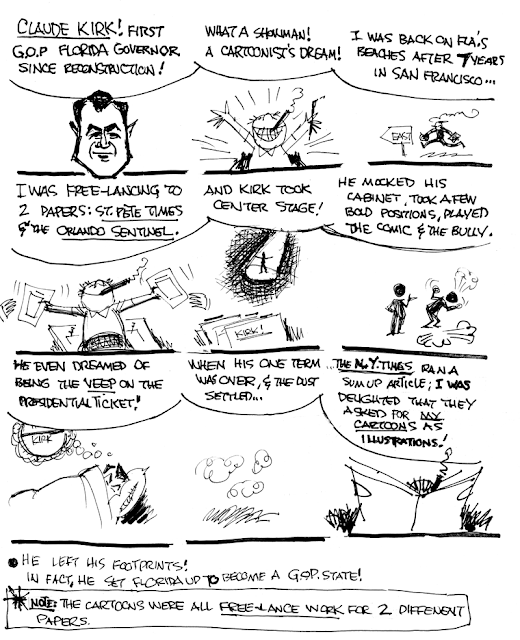 Join us next Sunday for a sampling of Ivey’s Claude Kirk cartoons!!

I know, I know. The rest of May was supposed to be posts related to Asian-American cartoonists. But I have to horn in here for just a moment to put on the record that I most emphatically DO NOT believe that newspaper readers are senile! Why? Well, I’ll try to keep it short…

A very nice reporter with the Rock Hill (SC) Herald called me for some bon mots about comic strips, and of course I was happy to comply. In the reporter’s article, which you can find here, I am recorded as saying that the newspaper audience is becoming senile.

I was, in fact, talking about the aging newspaper audience, and it is possible that in a lighthearted moment I jestingly made some mention of senility, though I do not recall having done so. But if I did, it was obviously made with tongue firmly in cheek, and obviously should not have been quoted as if I were, in all earnestness, contending that newspaper readers are suffering from dementia.

I realize that reporters have relentless deadlines, and I sympathize that they are underpaid and overworked. I have just enough experience dealing with reporters to know that if you get quoted precisely, and in context, you should consider it a small miracle. So I haven’t complained to the reporter or the newspaper about the article, which quotes me extensively and in most cases, incorrectly. I just wanted to go on record here, just in case someone reads the article and comes to visit the blog thinking I’m a raving lunatic, that I do not think that newspaper readers (a group of which I am a proud member) are a group of doddering old fools. We may be old, but we are better informed than most of the public, who get what they laughingly call news from TV.

The month of May is Asian-Pacific American Heritage Month. We’ll begin this week with a series of posts highlighting the career of Paul Fung, who will be followed, next week, with a look at Bob Kuwahara, Tom Okamoto and Chris Ishii. The Legend of Bruce Lee strip is discussed here and it has a link to a lot of the original art at Comic Art Fans. And here are some links to a few contemporary APA cartoonists.

Asian American Sequential Artists Resource Guide (AASARG) has a list a APA cartoonists’ and their web comics.
Be here tomorrow for the start of the festivities! 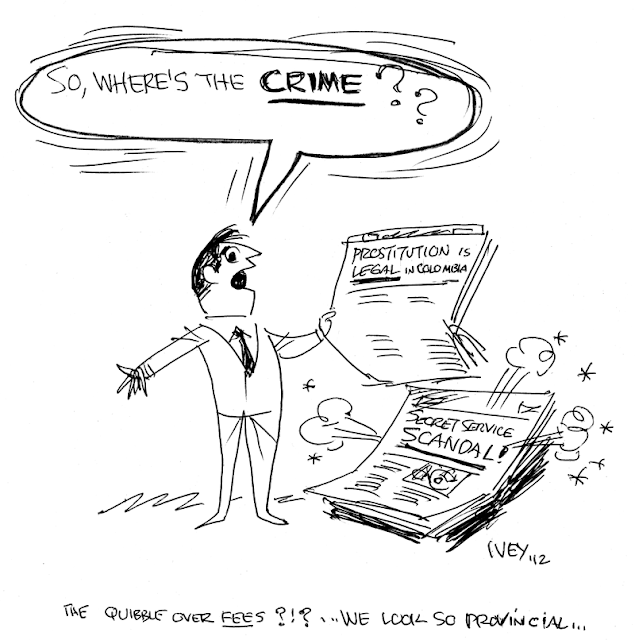 In our final post about the creators and features associated with the Chicago Tribune‘s short-running but pretty darn astonishing Crazy Quilt series, we have to tie off some loose ends. Luckily the Tribune makes that pretty convenient by putting all those loose ends in a nice little package.

In the teens the Trib seemed to be real serious about giving Sunday funnies readers a lot of bang for their buck. While the covers of the Sunday section were graced with lovely full-page strips, at least one page of the interior was jammed up with a whole bunch of one-tier strips. It was this interior page that became Crazy Quilt, by jumbling some of those shorty strips, and some new items, into one Frankenstrip.

After Crazy Quilt ended, many of the strips continued as standalone features, and even some of the panels. The panels were all thrown together on a single tier as you see above. It was in this way that Dean Cornwell’s Stone Age Stuff and Freddy Frappe Filosophizzes continued, as well as Quin Hall’s Pinhead Pete.

Stone Age Stuff and Freddy Frappe both continued until January 10 1915, and even appeared as strips on one occasion, November 8 1914.

Pinhead Pete continued as a panel until August 30 1914, but then returned as a full-fledged strip, replacing Hall’s Genial Gene, on November 1 1914. The strip version ran until January 10 1915.

The panel tier included other non-series stuff by Hall and Frank King, plus a never-really-titled series with a black porter named George.

Quin Hall, who had a delightfully playful wit as a cartoonist in his early days, contributed Genial Gene to the Chicago Tribune‘s Sunday funnies section starting on January 25 1914. Gene was a knowing pawn in Quin Hall’s games in some of the strips in this series, which broke the fourth wall on occasion (see especially sample #4). In these simple mostly one-tier strips the plump and mild-mannered Gene tried to woo Emily, while Pinhead Pete got in the way.There wasn’t much more Hall could do in his small space, but his jaunty dialogue made it a fun read.

Genial Gene became a patch in the Tribune’s Crazy Quilt feature, but returned afterward to once again appear on its own. It last ran on October 25 1914, and was replaced the next week by the now headlining Pinhead Pete. Gene made a final appearance in the new strip on it’s first week.

Veteran newspaper ink-slinger Everrett Lowry started his Chicago Tribune dog feature, And His Name is Mr. Bones, on March 22 1914. At first the stray dog and the strip itself were unnamed, and Lowry ran a contest to name the mutt. Soon after the debut of the strip, the still-unnamed character was pressed into service in the Crazy Quilt jam page. When Crazy Quilt came to an end, the next week the dog had, with no fanfare, been named Mr. Bones and the strip titled And His Name is Mr. Bones.

Mr. Bones shared his philosophical ramblings in the Tribune until January 24 1915, at which point both the dog and his creator dropped out of sight for a very long period. Finally, over four years later, acting as if the strip had merely taken a short vacation, Mr. Bones was back in the Trib’s Sunday section on May 4 1919.

Mr. Bones went right back to doing his business until November, when Frank King abruptly dropped his popular Sunday feature, Bobby Make-Believe. First Frank Willard was assigned to continue the strip, but that only lasted two weeks, and then Lowry was elected. Apparently not too keen on the assignment, Lowry tried to turn it into a vehicle for his character, renaming the strip Mr. Bones and Bobby. Even though Lowry was at the time using a kid character in his Mr. Bones strip, apparently it did not sit well with him to take on King’s character. After just two weeks, Lowry was released from the assignment and the Mr. Bones strip went back to it’s normal self, with Bobby Make-Believe now consigned to the ashcan of history.

I get the feeling the Bobby Make-Believe episode may have left a fatal wound in the relationship between Lowry and the Tribune. The strip did continue for five months, ending on May 5 1920, but it was Lowry’s last work for the Tribune, or for that matter, any major paper or syndicate.

Thanks to Cole Johnson for the images!

Hi folks! I’ve been off on my honeymoon with Mrs. Stripper, drinking in the wonderfulness of Costa Rica … not to mention the wonderfulness of Mrs. Stripper. Alex Jay was kind enough to take on the task of entertaining and enlightening the masses here on the blog, for which I thank him most heartily. I hope you all enjoyed his posts last month. They are a product of a whole different style of research than mine, and he uncovers amazing and interesting information that is completely beyond my abilities to gather.

I was supposed to be back at the helm on April Fools Day, but computer problems intervened. I was once again attacked by a very nasty virus, pretty much the minute I got home from the trip and turned on the computer. It’s an evolution of a virus I had before and thought I’d conquered with a System Restore, extensive manual cleaning, and disinfection tools. Turns out it was just lying low and cooking up nasty new ways to take over my machine. This time I went through four different disinfection applications trying to flush it out. Every one of them found things and claimed to have disinfected the machine — every one of them was fooling itself.

I finally gave up on disinfecting that machine, and have spent the last week loading all my stuff onto a new machine. This after finding out the hard way that my hotsy-totsy ShadowProtect Backup didn’t quite live up to its marketing in regard to being able to move all your stuff onto a new machine and configure everything automatically. The hype turned out to be just that. Ended up moving all my data and installing my apps manually.

For the record, and just in case you encounter the same thing, I believe the virus (or Trojan, to be more accurate) came in through a faked message notifying me to update my Adobe Flash Player. At first I thought Adobe was actually at fault for allowing a Trojan to piggyback on an Adobe update, but I realize now that I was taken in by a completely bogus update message. For goodness sake, if you see such a window pop up on your computer, don’t click on it; even to say “Don’t Install”! Go into your Task Manager and kill the process.

For the record, Ad-Aware was active on the machine and didn’t block it in the first place, and once the Trojan was resident, it could not be completely wiped off by Ad-Aware, Spybot, Kaspersky, BitDefender or Avast; though every one of them found the intruder and thought they’d squashed it.

So the upshot is that I’m on a new machine, and I’ve pretty much got everything I need transferred over now. After much research, I’m going with Kaspersky as my active antivirus tool, and also have installed NoScript on Firefox as additional protection. I hope that combo will keep the intruder from attacking me again on this clean new machine.

Probably tomorrow I’ll do a ‘real’ post and try to get back in the groove. See you then … I hope!